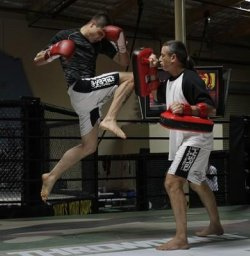 Josh Gross has some interesting details about Carlos Condit's decision to ditch his long-time trainer Tom Vaughn which Luke discussed with Condit on MMA Nation. I have been expecting Condit to move to Greg Jackson's camp for some reason -- since they're just across town in Albuquerque, NM. But that's not where he's gone, instead he's gone all the way to Tempe, AZ to train with the Arizona Combat Sports crew.

Vaughn and the ACS crew have an interesting exchange:

"Do I think Carlos went out there and got into a better program at Arizona Combat Sports? Absolutely not. Does he have better training partners? Yeah, probably. But he had some good ones here too."

While Vaughn can't help but feel as if Condit's new crew will reap the fruits of his efforts, he said the way in which Condit ended the relationship by e-mail instead of in person sent him into a "bit of a tailspin."

With his trust for fighters diminished, Vaughn has become defensive of his gym and his methods. "Nobody has ever left my gym and done better somewhere else," he said. "If he does, he'll be the first guy."

That's exactly what Trevor and Todd Lally hope to accomplish. The 35-year-old twins have quickly established their facility, thanks to the likes of WEC lightweight champion Jamie Varner and The Ultimate Fighter 8 winner Ryan Bader. Having Condit join their team, said Trevor, was as surprising as it was welcome.

"We just asked him if he could be open to some new things and maybe some new ways of doing it," Lally said. "He was. At first it was kind of a touchy thing to bring up. But after a month or so, we felt like we weren't doing our job if we didn't tell him a different way of how to step into a right hand, or a different way of how to counter a jab. This last month before the fight, he started clicking with us and it felt really, really good."

It will be very interesting to see if this is a good move for Condit on Wednesday night against Martin Kampmann who trains with Xtreme Couture.