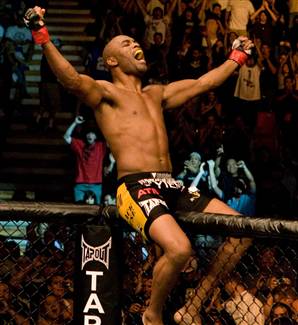 In order to train for his next fight with Leites, and probably moreso to get ready for his upcoming fight with Demian Maia, Anderson Silva brought in the big guns:

For the fight against Thales Leites, in UFC 97, the champion called what’s best in terms of ground fight: the Jiu-Jitsu world champions Ronaldo "Jacaré" Souza and André Galvão. And for Jacaré, who'll be back at Dream 9 (check here), Anderson is with the ground game ready for the bout.

"Anderson is training well and is strong in all MMA fundaments. Anderson is a phenomenon standing, but if anyone thinks that will take Anderson down and submit, is completely wrong. He’s a talent on the ground, has black belt level", says Jacaré, betting on his friend’s Jiu-Jitsu. "Anderson is intelligent and good on MMA, he can surprise any opponent. But, for this fight, I think he will make a game that he is better."

Maybe it's because we haven't seen him fight in 6 months, but a lot of people have forgotten that Anderson Silva is a legitimate black belt in jiu-jitsu.  Thales Leites may be better on the ground, but even that isn't a sure thing.  It'll likely be a very close match on the ground, whereas it will be completely one-sided standing.