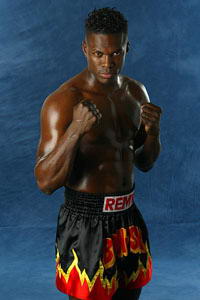 The K-1 World Grand Prix event this weekend was hailed as surprising, mediocre, and disappointing depending on who watched the event in the wee hours of the morning on Saturday. There were uneven matchups, surprising knockouts, and a crazy-haired Keijiro Maeda surprised both favorite Melvin Manhoef and Gohkan Saki will spirited performances that earned him the K-1 Heavyweight tournament title for the evening.

The bigger storyline involved K-1 champion Remy Bonjasky in an epic tilt to prove the K-1 world wasn't going to allow a transitioning MMA to K-1 fighter like Alistair Overeem to impose his will inside the ring. As the sun rose here in the States and we all struggled to maintain our coffee fix, Bonjasky squeaked out what could be seen as a generous decision win.

Bonjasky had this to say post-fight:

"My performance today was not my best. Honestly, on Thursday when I was asked by a fan for a photo while having dinner, and I stood up and twisted my knee. I wanted to cancel the fight, but after discussing it with K-1 and a doctor, we decided to continue. This is why I couldn’t do my usual flying knees and running around, so I apologize for that. It seems like I partially tore my meniscus, it was incredibly painful. To defend the name of K-1 was a lot of pressure, but it felt good to knock Alistair down. If I didn’t get the down it would have seemed like a draw. I wanted to finish him but my coach told me to not take any risks, and just take the win."

It was definitely obvious that Bonjasky was rather hesitant to throw any of his patented flying knees or kicks even in close quarters with the beefier Overeem. The more obvious question, however, out of the matchup was the judging.

Overeem battered Bonjasky for two rounds, and at one moment, looked to potentially have Bonjasky hurt in the ropes. By some miracle, Bonjasky was still able to garner 10-10 draw rounds in the first two rounds.

Many fans complained of the judging, but K-1's system does not revolve around a 10 point must system, and it also is hard to say what warrants a 10-9 round from a competitor. Unlike MMA, aggression, control in the ring, and working your opponent isn't that high on the point scale. Landing strikes is the most significant mark of winning a fight, but even in that state of judging, Overeem was the clear winner of round 1 and 2.

Bonjasky landed a flush right in the third, downing Overeem for the standing 8 count. The judges scored the round a winner for Bonjasky with the included knockdown, 10-8's across the board. Since Bonjasky earned 10-10 draw for the two earlier rounds, the clear cut winner was Bonjasky.

In my mind, this at least should have went to an extension round. Overeem earned 10-9 rounds in the first two rounds, and Bonjasky earning a 10-8's across the board in the third warrants a fourth round showdown.

It really leads to asking the question: What's going on with the judging? While many fans would throw out that the "fix was in!", I'll hold my breath and see what happens in the coming weeks in terms of Overeem talking up a storm and potentially seeing another matchup down the road in K-1. Perhaps an even larger story could be... should Ray Sefo even commentate anymore? His pure love/hate relationships with older fighters vs. the young fighters is sickening.