As regional MMA in New England goes, Joe Cavallaro's World Championship Fighting is undoubtedly running things right now. After only 18 months and six shows, the promotion is already looking to become a feeder for the UFC. (Dana White and fighters like Quinton "Rampage" Jackson, Kenny Florian and Marcus Davis are frequently on hand for special appearances and to corner their fighters.) Local cable network Comcast SportsNet began airing "WCF Rewind" - a half-hour recap of previous WCF events combined with fighter profiles - last month, and the promotion recently secured the area's top Harley-Davidson dealer as a sponsor.

I'll be moving back to Boston in April and hope to have full live coverage of future WCF events for Bloody Elbow.

From a press release in my inbox:

In front of a packed house of 4000 people at World Championship Fighting 6, Dan Ferrer won the first ever WCF Title fight, defeating Dan Bonnell by first round submission. Bonnell had won 5 fights in a row, all with WCF, but Ferrer put a stop to that at 2:48 of round one with a kimura. However, Bonnell may have been the real winner in this one though, as he proposed to his girlfriend in the ring after the fight. She said yes. 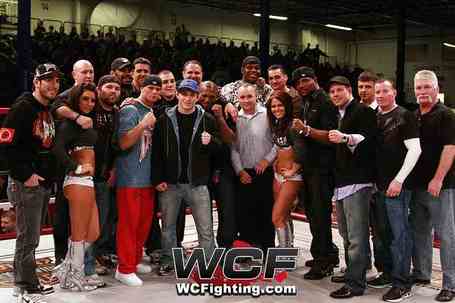