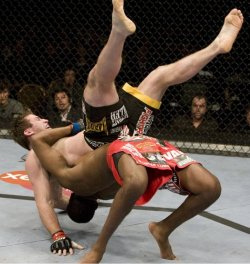 There was plenty of technique on display at UFC 94. I really had to think about what I wanted to talk about most -- George St Pierre's Superman Jab probably merits a column, and Lyoto Machida's footwork and trips were very nice but for my dollar, Jon Jones' display of Greco-Roman wrestling against Stephan Bonnar was the coolest of all.

For one thing, despite so many high profile MMA stars coming from a Greco-Roman background -- Randy Couture, Matt Lindland and Dan Henderson leap to mind -- I really can't recall ever seeing such a clinic of flashy greco moves in one bout.

Jones caught Bonner with a variety of flashy takedowns, including the suplex that's pictured here. I've talked about the suplex recently so I'm not going to focus on that beyong saying it's a classic greco technique and is perfect for MMA -- flashy and crowd pleasing and the slam does damage as well as scores points.

Jones was a state champion wrestler in Iowa -- probably the most competitive wrestling state in the U.S. New York and a national junior college champion out of Iowa (thanks zacd for the correction!). His meteoric rise in pro-mma at the age of 21 promises big things. He only started fighting professionally in 2008 and is already 7-0.

Combined with his beautiful greco technique, he's got some crazy striking: tons of knees from the clinch, spinning elbows, side kicks, some decent punching (although I'd like to see more combinations). His jiu jitsu game is an unknown quantity at this point, but with his youth and ability, he should be able to round out his game a great deal. The sky is the limit for this kid if he can stay focused on training and not let quick success go to his head.

And between the possibilities of athleticism and the possibilities of technique, there is Jon Jones. At 21 years old, with less than a year of pro MMA experience, Jonny Bones has already handled two very serviceable light heavyweights in Andre Gusmao and Stephan Bonnar. Moreover, he has done it with his own distinct brand of hyper-offense, where spinning back elbows are as likely as high-amplitude harai goshi, where flying front kicks are as likely as textbook lateral drops.

MMA has had its share of precocious prospects, but few have had the unique style of dynamism that Jones has. He is an athletic marvel, and not in the hackneyed fast-twitch muscle fiber, "explosive and athletic" way. Jones' coordination, leverage and body control are all amazing natural gifts that only reinforce his nature instincts in the cage. This is a future top-10 fighter who could fight for the next decade. Hell, the way sports medicine is going, maybe two decades (again, fingers crossed, knock on wood). And now, with less than a year's experience, he already makes MMA look like pro wrestling with his knack for hurling humans. Jones is a startling, tantalizing glimpse into the sorts of future MMA may have as similar specimens continue to pour in.

In the extended entry there's some gifs of the lateral toss in the full entry plus discussion of another takedown Jones used in the first round.

About the name of this feature: I chose Judo Chop because it’s an utter misnomer that is sometimes used by poorly informed MMA commentators during fights. It’s also from the Austin Powers movie. I chose it because it reflects my own lack of expertise and what this column is: my stumbling along in the dark trying to get a handle on the technical aspects of the fights. The techniques featured here will sometimes involve judo but not always. Sorry if that's confusing.

Here's a gif of a lateral drop from TheMat.com

Note that in this throw, the wrestler in blue has over-under grips, meaning his left arm is under his opponent's right and his right arm is over his opponent's left. Jones pulled the move on Bonnar with double overhooks, an even harder move to execute.

Another throw that blew me away was the second brutal toss that Jones landed on Bonnar in the first round. The first one appeared to use a leg trip, making it more of a judo move (I could be wrong, very hard to tell from the angle they showed) than a greco move -- lower body attacks are illegal in greco-roman wrestling.

Jones has a whizzer on Bonner with his left arm hooked over Bonnar's right and he's baited Bonnar into pushing against him with all his might. As soon as he feels Bonnar over commit, he grabs a collar tie (wraps his arm around Bonnar's neck) with his right hand and just throws Bonnar to the ground.

NOTE: As Jordan Breen noted in the comments, I missed the leg trip that Jones accompanied the collar tie toss with. Its still super cool, just not a legal greco-roman move. The lateral drop and suplex remain pure Greco.

Moves like that really illustrate the technique behind greco-roman wrestling. Just like wrestlers have been telling us for years, its about technique and leverage, not just strength.

From Smoogy on the UG (Smoogy made the gifs and identified the moves, the information about each move is stuff I found online:

Here is my breakdown after consulting with UGer Yatsuzaki, who actually trains UFC: