Share All sharing options for: The Week in Quotes: February 21st - 27th 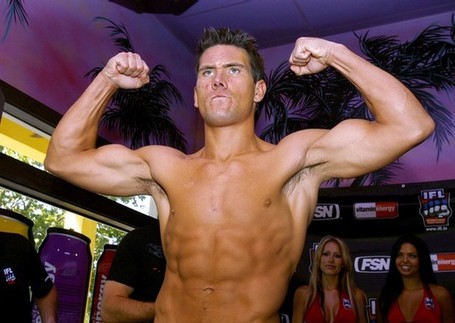 MAN, I DON'T FEEL SO GOOD.  OH, IT'S JUST MY COLLAPSED LUNG.

"He had a terrible weight cut in London, and cramped so badly after the weigh-ins that one of his lungs collapsed." - Author Sam Sheridan revealing details of Rory Markham's UFC 95 weight cut.  It did not go well. (Fighters Only)

"He didn’t even know it. He just said he was feeling pretty shitty." - Sheridan.  OK, seriously, you HAVE to know when your lung collapses, right?  Can someone throw me a bone here?

"After the knock-out, he got x-rayed, and the Doc said 'Can I X-ray your chest, it looks weird?' and Rory said sure, and they said, 'You have a collapsed lung.'" - Sheridan, then they also said, you have a baseball sized tumor in your head.

"The only thing he said to me was 'That was the worst weight cut I’ve ever done.'" - Sheridan.  I certainly hope so.

"I was born here, and I’ve been bred here. I don’t mind taking on that challenge and showing him this is my home and not his." - Dan Hardy, who must actually believe that Marcus Davis calls the islands home. (Sherdog)

"I’m not going to get on here and talk at all about the Irish Vs American crap. Its old news. All I will say is I told Joe Silva to make this happen for June 13th in Germany- neutral ground for both of us." - Davis.  Neutral ground?  In MMA?  Who gives a fuck? (The Underground)

"There are so many good guys in my division but I managed to lock eyes with Georges St Pierre outside the cage and we had a moment where I was like — ‘I’m coming for you, I’m coming for you.’" - Hardy.  St. Pierre later stated he was thinking, "Tha guy look a lot like da guy who serve my hamburger at Mac Donalds."

"I wont have a chimp - I’m now thinking orangutan- like Clyde from Every Which Way series. It’s my new dream. " - Davis.  Jesus f'n christ.   I hope the ape beats you with your own arms.

WHEN ELECTED OFFICIALS USE NUMBERS INCORRECTLY (OR MATH IS HARD)

"The poll found overwhelming opposition to making Mixed Martial Arts legal in New York State. Of those surveyed, 67 percent said they opposed making MMA legal in New York. Just 18 percent said they supported making ultimate fighting legal. I believe my district is reflective of the state as a whole and am confident a statewide poll would yield similar results." - New York Assemblyman Bob Reilly.  Where to start?  1)  Of course, taking a sample of less than one percent of YOUR DISTRICT surely translate to a proper estimation of the opinion of the THIRD LARGEST POPULATED STATE in the country.  Well done there, Robert.  2)  I'm sure the survey's question was completely fair and unbiased while also providing the surveyee proper information regarding the issue. (Cage Potato)

JUST LET HIM KILL ME SO WE HAVE A DEFINITIVE OUTCOME

"As for next time, my message to all the ref’s would be to, please let the fight go until I’m put out to sleep." - Josh Koscheck, upset about the finish of his bout with world-beater Paulo Thiago. (Kos-Check.com)

"I took this fight just as if I was fighting the number one fighter in the weight class." - Koscheck.  I'm not saying he didn't train hard, but he can't be serious.

"I don’t think I could have done anything different in training camp to make the outcome go my way, so I guess that’s life." - Koscheck.  Maybe try working on your head movement with your jab?  But yeah, you're right, perfect camp.  Obviously.

"War Machine." - Ken Pavia when asked who the latest fighter he has picked up that he is the most exciteda bout. (Sherdog)

"I think he's a genuine, wear-it-on-your-sleeve guy who sometimes needs a little bit of a filter." - Pavia.  He's more of a "wear-it-on-your-nazi-armband" kind of kid.

"I think he's a good kid, he's misunderstood." - Pavia.  Yeah, when threatening the President isn't the worst thing you've done in the past six months, you lose the "misunderstood" tag.

"You can't do that. It's no different than Margarito." - UFC President Dana White talking about Greasegate.  And while I agree it's 100% wrong, c'mon Dana.  Margarito could really kill someone with those plastered gloves.  Penn was in no such danger. (Cagewriter)

"I think he absolutely positively knew that he was rubbing grease on him." - White on "that stupid cornerman" Phil Nurse.

"When they shake your hand with Vaseline on it, that shit is on your hands until you wash your hands with soap." - White, who I'm sure is only used to Vaseline being on his hands after shaking with "Stitch."

"I eat a lot to make 205, no?" - Former Pride middleweight champ Wanderlei Silva. Chicken and rice, rice and chicken. (Fighters Only)

"When arriving at the ring, I noticed that I wasn't even sweating and my intensity was getting lower." - Former Pride lightweight champ Takanori Gomi, not to be mistaken with a 70 year old man. (MMAFighting.com)

"I'm not ready to concede that he has better punching power." - Keith Jardine on Quinton Jackson. Trivia time: name the fighter Jardine one punch KO'd in the UFC. (MMA Fanhouse)

"If I was the promoter of a show I wouldn’t have guys like that fighting on my show." - Quinton Jackson on Lyoto Machida. I would love to see a Rampage Fighting Championship show: scantily clad Japanese women, monster trucks with his picture plastered all over, and his fourteen kids fighting to the death. (MMA Fanhouse)