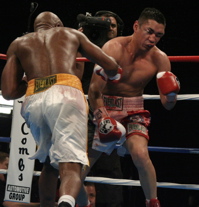 After his own corner exercised poor risk management in urging their fighter to continue, Oscar Diaz had to have surgery to relieve swelling in his brain and was in a coma while breathing through a respirator. Fortunately, however, Diaz has turned a corner seven months after the disastrous event:

Diaz collapsed in his corner before the 11th round of his fight with Delvin Rodriguez on July 16. After numerous medical procedures, he went into a coma and awoke in September.

The recovery process is long from over. Dr. David Jimenez, the boxer's chief neurosurgeon, told the San Antonio Express-News that Diaz entered a local rehabilitation facility.

He told the paper that Diaz can sit up in a chair, respond to commands and smiles when someone tells a joke. The doctor said he was optimistic that Diaz would be able to walk and talk again.

Will he box again? Never. But it's very encouraging to hear he'll be able to live a mostly normal existence with a relatively high quality of life. All things considered, he could've ended up far worse or even dead. To know he'll be able to spend holidays with his family is an insufficient but welcome revelation.

Let me be clear: the record on boxing's safety is well-known. I am in no way suggesting incidents such as these (those where preventative actions were real options) are evidence that boxing needs banning or is an unworthy sport. But as for vehement critics of MMA in the wake of an incident in Canada, they seem to be noticeably silent. And the argument that Diaz's situation may not be on their radar merely reinforces the argument of selectivity: the idea a boxer can be badly hurt or even killed in professional competition is passe enough to the point where media outlets don't pay attention or promote the story as unique, worthy of attention or a serious health risk. But an injured MMA fighter? That's dog and cats living together...even mass hysteria.

If there was any confusion over how seriously a significant portion of the sports (and larger) journalism punditry community takes their job, let this serve as a lesson to you. The byline was always a self-promotion machine, but was forgivable for relevant, meaningful or insightful content. Now we have little more than page fillers and a cheap facsimile of outrage. Pretty compelling stuff.