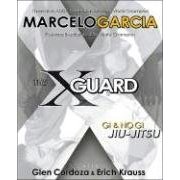 Since he lost by TKO in his MMA debut, fans of uber-grappler Marcelo Garcia have despaired of seeing him bring his next-level grappling game back to MMA. But now rumors are mounting that he'll be taking part in the DREAM welterweight GP this year.

I figured I'd better try to learn up on the man's game before the gran prix begins. No better place than Victory Belt's excellent X-Guard: For Brazilian Jiu-jitsu, No Gi Grappling, and Mixed Martial Arts.

This one is no exception. The organization is excellent. The sections make sense and it increases your understanding to read the book in order but you can still jump in and scope out a particular technique. The photography is clear and every move is covered from multiple angles. The explanations are clear and coherent.

Which is good because Marcelo Garcia is talking about some next-level shit. The X-guard is a position of his own invention that basically entails wrapping up both legs of a standing or kneeling opponent, thus creating an enormous number of potential sweeps and submissions.

In the still photos and step-by-step explanations of a text book, you might get the idea that this is a wildly impractical position for submission grappling, much less MMA. But when you see Garcia in action in any of the world's top jiu jitsu or submission grappling competitions, you see what he means when he emphasizes the importance of speed and commitment when using the position. I've included a good highlight video in the full entry so you can see what I mean.

I still wonder about how applicable the X Guard will be in a context that allows punches to the face. But if anyone can do it, Marcelo Garcia can. He's been training with the American Top Team and should be prepared for professional MMA. There is also a section on the butterfly guard that puts several new twists on that more conventional position.

His next book with Victory Belt will discuss his Arm Drags and Back Attacks and I'm totally looking forward to that. But you can tell even from this book that much of his style is built on forcing his opponent's off balance by grabbing an arm and pulling it to the opposite side. Technique after technique is built on twisting the opponent and forcing him off-balance.

One thing to note is that this book is primarily for jiu jitsu and submission grappling rather than MMA. Each technique indicates if it is suitable for gi or no-gi competition. The gi moves rely on using the opponent's gi to hold a limb for a long period of time. The no-gi versions are quicker and don't rely on sustaining a grip for as long. He has a no-gi alternative for about 3/4 of the gi techniques but frustratingly didn't have a no-gi version of the full guard to x guard transition. I'm curious to see if he has a secret to pull that transition off in MMA.

All in all this is another winner from Victory Belt. Unlike some of their manuals which focus on more meat and potatoes techniques, this one is thoroughly on the cutting edge of 21st grappling theory and practice. Check it out.