Share All sharing options for: More on the Georges St. Pierre Vaseline Controversy 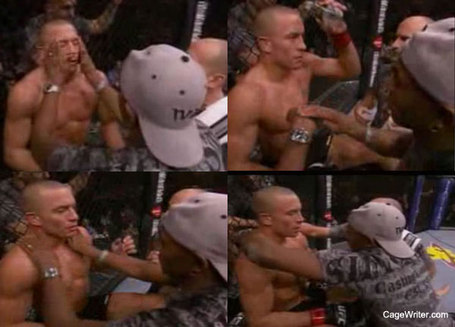 More on the story. Steve Cofield has the best summary and the image above:

After a dominating victory over B.J. Penn at UFC 94, Georges St. Pierre is clearly the better fighter. GSP left no doubt. And yet now there is, thanks to one of his cornermen, Phil Nurse. It's pretty clear by watching the video that Nurse had some Vaseline on his hands when he rubbed St. Pierre's shoulders, back and chest between the first and second rounds.

Why is that a big deal in mixed martial arts? It's significant because of all the grappling and maneuvering that takes place on the ground. St. Pierre was on top of Penn in the second round and the Hawaiian tried several times to shift his legs up to work for a triangle choke or an armbar. Grip and some friction is huge in these cases and a slippery fighter would make it more difficult to lock on one of those holds. Above you can see, Nurse apply Vaseline to GSP's face, then get more Vaseline, then rub his shoulders, arms and back.

...
(NSAC executive director Keith Kizer) bolted into the cage when he saw Nurse doing the same thing between the second and third rounds. Cage Writer spoke with Kizer after the fight and he was still steaming, saying that the rubbing of the back with Vaseline was completely inappropriate. But he was unsure if it had been done between the first and second.
...
Ultimately, did the use of the Vaseline win the fight for St. Pierre? No. But Penn's camp does have a right to complain.

Here's Dana White's take for those who think this is merely the B.J. Penn camp whining:

..."some Vaseline on a guy's back didn't change the outcome of that fight, but you don't do it," and said the blame should fall on the cornerman responsible and not GSP.

"If a guy was intentionally putting Vaseline on a guy's back, he should never corner a mixed martial arts fight again."

And Greg Jackson's defense? The old witch doctor told us to do it explanation, from MMA Weekly:

Jackson spoke to MMAWeekly.com on Sunday afternoon and said the misunderstanding arose after Phil Nurse, one of St. Pierre’s cornermen, executed a ritual taught by a member of St. Pierre’s team, a “witch doctor” named Steven Friend.

“So in between rounds, (Friend) had this little drill that you do – and Phil Nurse is the one who knows how to do it – he showed Phil, and this is what Georges wanted, so we did that,” Jackson said. “But this is why we were doing it. He rubbed your back and tapped your chest; I don’t know exactly how it works. But anyways, what that’s supposed to do is get your energy in line, or motivated or whatever. So in between rounds, we had Phil Nurse do that.”
...
“The controversy came because Phil Nurse also was putting Vasoline on Georges’ eyebrows,” Jackson elaborated. “In between rounds, you always want to put on Vasoline on (a fighter’s face). So Phil Nurse put all the Vasoline on his face, so his hands might have had a miniscule amount left over from that, when he went around the side and rubbed a little point on his back, and tapped on his chest.

“At that point, somebody in the audience thought we were greasing George down, and ran over and told the commission that we were greasing his body down. The commission came in and said ‘you can’t grease him down,’ which didn’t work. They said ‘you’re putting Vasoline on his back,’ and Phil’s like, ‘oh, there might be a little on my fingers, but it wasn’t intentional at all, and of course they wiped it right off and it was gone, so it wasn’t a factor in the fight at all.”

Jackson doesn't mention that "somebody in the audience" was apparently Chuck Liddell. Hardly an uninformed spectator. *

My take on all this gibes with Dana White. I don't think it decided the match, but it shouldn't be allowed and Phil Nurse should be fined and lose his cornering license for it if it can be shown that there is a pattern in multiple fights.

*NOTE: Chuck was complaining after the fight. Its unconfirmed that he was the person Jackson is referring to.