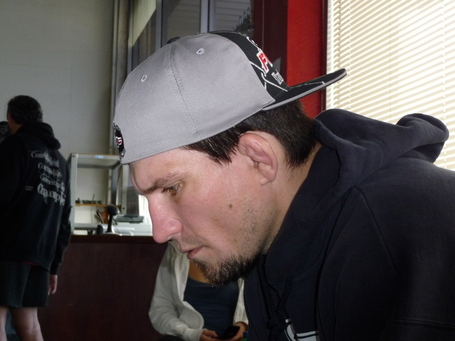 When Pat Minihan steps into the cage to take on the young up and coming Ky Hollenbeck at Cage Combat Fighting Championship this Saturday, the bout could be viewed as a classic ‘prospect versus journeyman’ match up. However, Pat does not fit the mold of a typical grizzled veteran.

Minihan, a 33 year old American Kickboxing Academy welterweight and the last man ever required to try out for the team, left MMA in 2002 and stopped fighting professionally for five years. Despite devoting himself to fighting since 2000 and following three years of military service, Minihan walked away from the cage after a bout in Boise, Idaho.

"There was a zip tie on the cage and I ripped the top of my knee off. I could see everything moving inside my knee. The insurance didn’t go through and then the promoter’s number changes. That cost me 1800 bucks to get my knee fixed. I got stuck with the bill; I was upset and said, ‘I’m done. Forget this."

Coming from a lineage of firefighters, Minihan chose to continue the family tradition. However, after completing the internship process in Menlo Park, CA and witnessing the politics and rigors involved in firefighting, Pat found himself reflecting on his career move.

"It was my birthday and I went on a call where there was a woman dying of cancer. She was tearing up, then she flat-lined right there and us four guys were the last thing she saw. I remember going home and I wasn’t the same. What got to me was that (as a fireman) you were sitting around waiting for something bad to happen and then you’re excited when it does happen. You want that to happen but…no, you don’t want that to happen!"

While Pat worked through his dilemma to remain in the field of firefighting or return to the cage, Ultimate Fighter hit television sets around the country and became a catalyst for the sports rise to prominence. MMA’s increase in popularity caused some veteran mixed martial artists, who had been around the sport for years without fame or fortune, to become green with envy or possibly even jealous of the glory bestowed upon the new generation of fighters because of a single reality TV show. Minihan didn’t remain in that category for long.

"It (MMA) took off and I missed the boat. I missed the boat and it was a very depressing time. I remember being mad all of the time and being angry. The best thing to do was to get back in and train."

After deciding to leave firefighting, Pat returned to MMA but faced an unforeseen obstacle in his road back to professional fighting. Eric Wrey, a childhood friend that inspired Pat to get into the sport, overdosed on pain medication.

"I was helping Eric train for a fight, he was out of shape and I didn’t know he had a substance abuse problem with pain pills. He O.D.’d and he died and I knew him since I was fifteen. When times get hard, I just think ‘Eric would want me to get through this."

Despite being an active intern with the fire department, Pat ballooned up to 230 pounds. Pat spent part of his second tenure at AKA occupying a 1970’s RV parked in front of the gym and trained hard to drop back down to 170 pounds. In his second fight, Minihan took on an opponent who the late Eric Wrey had his sights set on facing; Marlon Sims.

"Eric just passed away and he really wanted to fight (Sims). One night I came across Marlon Sims on Myspace and I read his profile and it was all, ‘I’m the best fighter in the world!’ It was all nonsense! Then I sent him a message saying: Your girlfriend has nice ti*s! He got pissed and I told Bob Cook, ‘Me and Marlon Sims!"

Minihan defeated Sims via rear naked choke at Gladiator Challenge 72 in December of 2007. Despite this victory, Pat would suffer from multiple injuries and grew disillusioned with fighting throughout all of 2008.

One man confronted Pat about his indecisiveness. "Javier Mendez called me out and said, ‘Stop being a fuc*in’ puss* and fight!’ I was pissed. Me and Jav were going at it one day and I said, ‘With you or not with you in my corner, I’m going to fight’."

Currently, Pat Minihan finds himself days away from another fight and Javier Mendez oversaw the final sparring session of Minihan’s training camp. Win or loose, his outlook on his career may seem a cliché; however, Pat views MMA as one piece of a bigger picture.

"I look at it like this: You stay in this game long enough, your going to win a lot, if your with a good team, and your going to loose some. When it’s all said and done…. I’ll be fine. I’ve gotten this far in life and I’ll get through it."