Remember the early UFCs when guys like Don Frye were running around dominating opponents?  I sure do, so when I saw Sherdog published a brief Q&A with Frye, I was excited to hear from the legend again.Journalists love to ask old school fighters about the sport today and how it has evolved, and Jason Probst proved to be no different.  Frye says the guys are the same and they do a "great job," then slams promoters of the sport -- they "are what's brought the sport down." 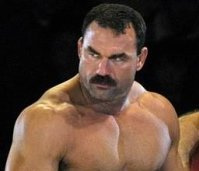 Asked what would fix the current situation between promoters and fighters, Frye had a thought that is rather amusing and not surprising:  "Kill all the promoters, and start all over again."

Although he still is willing to fight, it's obvious his best years are behind him, and instead appears to be enjoying his time acting.

Q: You’ve tried acting lately, appearing in a few productions. How do you like it so far?
A: I’ve made a couple movies. Earlier this year, I made "Public Enemies" and just got done with a small role in a movie called "Number 13" with Jason Statham and Mickey Rourke. It was a pretty good experience.

Q: You’re a fighter. They’re actors. What was it like meeting and working with them?
A: They’re a bunch of good guys. Hell, they’re real polite … just regular old boys. Acting is their job.

Regardless of his ambitions to fight cans and see if he can win -- or acting in B-level movies at best -- it's great to hear from a legend!