Despite being fired by the UFC and Bellator Fighting Championships due to his immature and irrational MySpace bulletins, "War Machine" Jon Koppenhaver will fill in for Phil Baroni on Feb. 27 at XMMA 7: Inferno.

War Machine will fight undefeated Guillaume de Lorenzi (5-0) in the main event of the night.

The following bulletin was posted on War Machine's MySpace:

That’s right! I’m doing this one short notice but it’s all good, I’m a warrior and warriors FIGHT! I’m fighting in the main event and filling in for my big bro Phil Baroni to whoop some French Canadian ass! My opponent is the hometown boy and is all hyped up in canada. They are calling him the next St. Pierre…we shall see.

Anyone in the area please come show your support!!
Thanks
WM

He continues to train at Xtreme Couture in Las Vegas, essentially hoping he'd have a chance to redeem himself among MMA fans who have obviously been more than willing to criticize him. 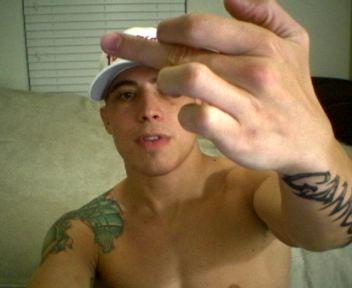 It's unknown why Baroni has withdrawn from the event, though it's worth noting his contract was recently acquired by Strikeforce.

Although he hasn't been active in the cage lately, War Machine, along with the controversial, idiotic MySpace bulletins, was also recently arrested.  He was arrested after a scuffle inside the Krave Nightclub & Lounge in Las Vegas, and it's possible the punches he threw at nightclub security staff could have him face jail time for probation violation.