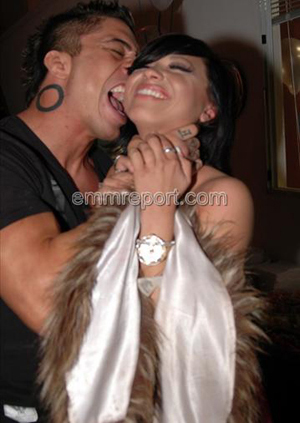 No I did not hit Alanah. We were not fighting. We are not bf/gf, we are friends and hang out often and are BOTH very confused as to how this accusation came about... I was outside talking to a guy I met a week ago named Daniel and was suddenly swarmed by Derek and 6–10 other guys. They were telling me that I hit Alanah and they were cursing at me saying that if that is true I’m gonna get fucked up. I told them I had no idea what they were talking about and told them to even ask Alanah. They persisted and grew more and more angry the more I denied it. They began to circle around me and I was sure I was gonna get fucked up because I was so heavily out numbered and that’s when we started fighting.

Someone lunged forward at me in my peripheral vision and I turned and hit him as he did... Once the initial blows were thrown I continued to punch anyone that came towards me that I thought was a threat. I was working my way toward my car and everywhere I looked there were angry people trying to block me off. At one point even a girl, I think Brooke Haven, was punching me in the head…lol. I got hit a couple of times from the back and side but Brooke is the one who got the most punches in on me…haha…but that’s only because I didn’t hit her back. I actually really liked Brooke and was sad that I was involved in a fight that ended up ruining her party.

I think if everyone was sober they would have not rushed to me and surrounded me so aggressively. I think they would have slowed things down and would have done the smart thing first which would be to ask Alanah if anything had happened. Then if Derek (my agent) was sober and rational he could have simply pulled me aside and asked me what, if anything, had happened. This situation was a huge misunderstanding that could have been easily resolved. I can’t say that I blame them tho. If I had been in the party and heard that someone hit Alanah I too would have probably done the irrational thing and went to attack the person accused. BUT after later learning that it was untrue I would have felt very stupid and would have tried my best to apologize to that person. Either way this is why I am not angry with any of the guys that rushed me. They THOUGHT they were protecting Alanah and she is my friend so I can appreciate that. The only person I am upset with is Derek. He was my agent as well as hers and I think he handled the entire situation very innapropriately.

While he blames it on the guy who spread the rumor, War Machine has zero regrets on what he did:

I think that every person that I hit was a threat to me and my safety so in that regard they deserved to be hit. On the other end I think the real problem here is the a**hole that spread the rumor that Alanah was hit. He is the one truly responsible for everyone’s injuries and the entire misunderstanding. The people rushing me were only looking out for her…they believed that I hit her and if that was in fact true then I believe they would have been right to attack me. BUT seeing as it wasn’t true they were wrong... I am sorry for the misunderstanding that led to their injuries but I will never apolgize for protecting myself when I thought I was in danger. I have zero regrets. Had I not been able to fight them off and would have been beaten severely is a lot worse to me than proving my innocence. I have apologized to Brooke via text message several times. NOT because I did anything wrong but because I was part of something that ruined her party. I liked her and thought she was a very sweet girl. I even came to the party early to help blow up balloons and set things up. I’m a nice guy and everyone would still think so if not for the bulshit misunderstanding and the asshole that started the lie about Alanah.

The only thing I need to do differently is not put myself in environments where trouble can happen. I thought I was safe at the party. I thought Brooke was my friend and I thought Derek was too. I felt safe going there. I never thought that Derek would have chosen to handle things this way.

On what happened after the incident:

I left the party because I had people coming at me from every angle and I didn’t wanna run out of luck and end up finally being toppled... After the party I went to my friends house to have a beer and relax. No "injuries", my right elbow hurts and I had a few bumps on my head but that’s it. My lawyer says not to worry. That it will be very easy to show that this was self defense.

As reports said, it really seems like everything really started from a rumor that War Machine hit his "girlfriend", which both he and Alanah herself denies. He also mentioned that while the people involved have been saying online that War hit her, the official statements from all the parties involved didn't have any mention of it at all.