Shinya Aoki Sets New Lows for Sportsmanship at Dynamite!! 2009 by Breaking Mizuto Hirota's Arm and Then Taunting Him

Share All sharing options for: Shinya Aoki Sets New Lows for Sportsmanship at Dynamite!! 2009 by Breaking Mizuto Hirota's Arm and Then Taunting Him

Shinya Aoki has broken an opponent's arm before -- he snapped Keith Wisniewski's arm at a Shooto bout in 2005 (video here) -- and he's taunted opponents after matches before but he reached a new low at this morning's Dynamite!! 2009 bout against Sengoku Lightweight champ Mizuto Hirota, deliberately breaking his arm and then taunting him after the fight.

Aoki may have been seeking revenge for teammate Satoru Kitaoka who lost the Sengoku title to Hirota a few months ago.

Aoki, a submission ace, wasted little time in closing the distance and moving the fight to the floor. Once there, Aoki swarmed on the attack and immediately worked Hirota into a compromising position. With Hirota's arm wrenched behind his back, Aoki torqued the limb and shoulder while securing mount. Unable to force a submission, Aoki turned Hirota to his back and continued to work the isolated appendage.

With a hammerlock in place, and the weight of his body against Hirota's single arm, Aoki cranked the hold until the arm snapped. The match was immediately halted, though it was far too late to save the arm. Aoki stood up, and in a show of sportsmanship that would make Brock Lesnar blush, stuck a middle finger in the face of his injured opponent.

In a battle of lightweight champions, Dream's Shinya Aoki immediately put Sengoku's Mizuto Hirota on the mat and took mount with Hirota's arm wrapped up and behind his own back. Aoki then proceeded to, quite literally, break Hirota's arm in an odd sort of twisting armbar. The maneuver popped Hirota's elbow out of place, leaving his forearm flaccid.

Following the finish, Aoki put himself up for non-sportsman of the year by screaming at Hirota and shoving his middle finger in the Sengoku champion's face.

Video and gif after the break. 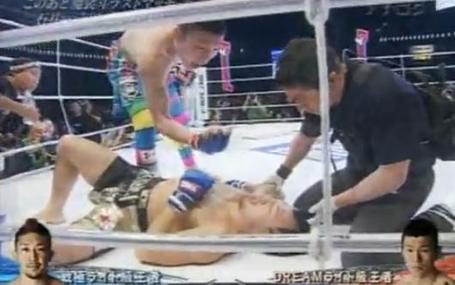