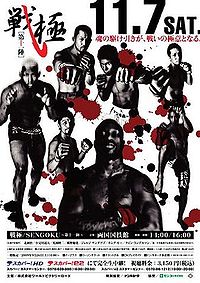 The most shocking outcome of the evening came during the middleweight match-up between Jorge Santiago and Mamed Khalidov. Khalidov's dominating record against lesser competition over the past couple of years was the swaying vote in why Khalidov came into the match-up as the clear underdog, but he proved that he could hang with one of the best middleweights in the world by defeating Santiago via TKO at 1:45 of the first round.

Strangely, Santiago was stunned by a hammerfist while working from top control. Santiago immediately dropped on top of Khalidov in a daze, and Khalidov quickly worked his way to the top to finish Santiago. It was a stunning upset from a blow that seemed unassuming, but the win should vault Khalidov into most MMA rankings' top ten list at middleweight.

Khalidov's win wasn't the only surprising result of the evening. By most accounts, Michihiro Omigawa didn't do enough to defeat Hatsu Hioki in their featherweight main event showdown. Hioki dominated the first round with an advanced ground game, half-guard strikes, and a near armbar submission while the third round likely went to Omigawa as he peppered Hioki with strikes. The second round was the closest round of the three rounds, but most watchers scored it for Hioki as he beat Omigawa with jabs and countered nearly everything Omigawa threw.

Unfortunately for Hioki, the judges saw it differently as Michihiro Omigawa was given the win via split decision. Interestingly enough, Omigawa commented in the ring that he felt he didn't win. It's nice to see a fighter with some honesty after such a controversial victory.

Former lightweight champion Satoru Kitaoka took the beatdown of his life in his lightweight battle with Bellator veteran Jorge Masvidal. After securing an early takedown, Kitaoka grappled with Masvidal for positioning while also latching onto Masvidal's limb. It looked as if Kitaoka may pull off a quick leg lock submission victory in the early moments of the fight, but a very active and pressing Jorge Masvidal unleashed loud, booming blows to the head of Satoru Kitaoka during the ground exchange. The round ended after Kitaoka withstood a couple of minutes of brutal ground strikes, and he had to be carried to the stool between rounds. Miraculously, Kitaoka continued on into the second round, but his night ended late in the round as Masvidal punished him once again with ground strikes, knocking him out.

The event didn't live up to my expectations as a phenomenal card, but some of the battles were fun to watch. Khalidov vs. Santiago would have been a bit more revealing had it lasted a bit longer, but Mamed will surely gain bigger fights from his win over Jorge. While I think a rematch with Jorge would reveal some problems in Mamed's game, it's tough to say whether Khalidov is just that powerful or if he happened to hit the right place and the right time.

From what I've read, Omigawa vs. Hioki had two judges call the fight a draw with the must-decision going to Omigawa from one of them. Most fans don't realize that Sengoku actually scores these bouts under a 10 point must system by round, just like North American promotions. The major difference is 10-10 draw rounds are scored more frequently, and a majority draw must be decided upon by the judges at the end of the fight. In this case, Hioki and Omigawa both received votes as the must-decide winner with the third judge going with Omigawa.

While I could see some of those rounds being tough to judge, I imagine Sengoku is judging some of the striking heavy bouts as K-1 battles. If it's even remotely close, a draw has a good chance of being scored. It's unfortunate because I felt Hioki easily won rounds 1 and 2.