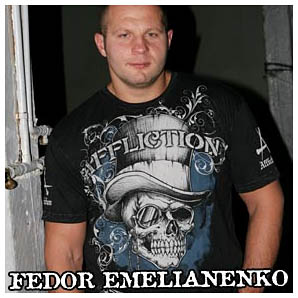 Note:  All information in this post was obtained via Affliction's motion to dismiss filed on November 6, 2009.  It is all public information and can be obtained through the Pacer system.

The most interesting part of the filing is Affliction's disclosure to the courts of its agreements with Fedor Emelianenko and M-1 Global. They disclosed the promotional agreement as well as the "consulting agreement."  According to the initial M-1 filing there was a third consulting agreement related to the M-1 Challenge TV show, but as far as I can tell that agreement hasn't been disclosed.

Below I'll go through the promotional agreement's essential terms and add my comments in italics where I feel anything additional is warranted.

--The contract arranges for four first class tickets and three coach tickets from St. Petersburg to wherever the fight is.  It also arranges for four first class hotel rooms for up to five nights, round trip transportation on the ground, and meal allowances.  This section is more extravagant than equivalent UFC contract provisions for its top stars.

-- The contract calls for three fights under the Affliction banner, and makes Affliction the exclusive home of Fedor fights in the United States.  However, the contract states that any fight between Fedor Emelianenko and Randy Couture is excluded from the contract and can take place elsewhere.  It's clear that when this contract was signed Fedor and M-1 were still shopping around a potential Couture fight incase he ever got out of his contract.  This also further confirms that Affliction never had the rights to this fight.

--The contract states that it ends on the earlier of two dates: March 31, 2009 or after Fedor's last fight, unless the contract is extended.  This will be a serious litigation battleground; M-1 will argue that Affliction extended the contract by promoting a third show.  I find this argument fairly convincing.

--Affliction agreed to make all efforts to feature a M-1 logo on the mat.  Fedor was allowed to choose any sponsor as long as there was no conflict with Affliction.

--Fedor Emelinaenko reserved all rights to distribute and exploit his bouts in Russia and Asia.  He had the right to retain all revenue from the sale, license, or any other exploitation of his reserved rights to market the broadcast.  There are other specifics regarding Affliction's responsibility to provide Fedor and M-1 with a high definition feed.  The rights include streaming rights, and extend beyond Fedor's fights to the undercard and preliminary fights.  You can imagine the UFC would never agree to such a term.

There are a number of other important and interesting terms, but those are the essential ones.

--M-1 was also required to fully cooperate and assist in the advertising and promotion of each fight.

--In exchange for these consulting services, Affliction agreed to pay M-1 a consulting fee of $1,200,000 per fight.

I believe there is still one more consulting agreement out there based on my reading of M-1's lawsuit, but Affliction did not disclose it here.  Just counting these two agreements, Fedor Emelianenko received $300,000 per fight while M-1 Global received 1.2 million.  Fedor Emelianenko is a 20% owner of M-1 Global.