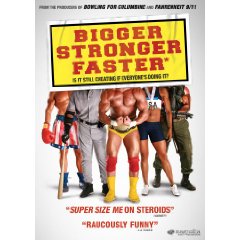 Earlier this week, HDNet owner Mark Cuban spoke out about steroids and got quite a backlash in the media, but I think his comments are worth reposting:

"I'll get killed for saying this," Cuban replied, "but I'm not so against steroids if they're administered under proper supervision and there is no long-term damage."

He said that steroids, which are banned by all the major sports and are also illegal to possess without a doctor's prescription, may benefit those recovering from surgery.

Cuban said he hoped his comments would initiate a conversation on a topic that is considered radioactive. If the proper medical criteria are met, he added, "why wouldn't we" use them for medical reasons.

Last night I watched Bigger, Stronger, Faster a bracing, no bullshit documentary about steroids. Director Christopher Bell, a gym rat and weightlifter who has tried steroids once starts with the story of himself and his two brothers, both sometime pro-wrestlers, who are unrepentant users.

Bell takes an even handed approach and lets the people he interviews speak for themselves. Including Rep. Henry Waxman, the Congressman who called the steroids in baseball hearings. Waxman's interview makes it pretty clear he doesn't know a great deal about steroids.

Bell talks to a number of people who take  a revisionist view of steroids. For example he talks to numerous scientists who actually research steroids and their effects on athletes. He contrasts those scientists with their much more moderated views with the hysterical alarmists who dominate media coverage.

He debunks the famous claims that Lyle Alzado's brain cancer was caused by steroids -- or at least points out that there is zero evidence linking that kind of lymphoma to steroids.

He points out that before steroids were classified as illegal drugs by congress that all the medical experts who were consulted advised against banning them.

But he also takes a hard, honest look at his two brothers. One is a high school football coach who lies to his students and tells them he's not a steroid user. The other is a failed pro-wrestler who's now working for his father's accounting business but is still using steroids and frightening his parents. It's scary and sad. Very brave and powerful film-making by Bell.

He rips the supplement industry and Senator Orrin Hatch who changed the laws so that the FDA now has to prove a supplement is dangerous instead of the old way where supplement makers had to prove their claims where true. Bell even whips up his own supplement line and shows how $1 worth of ingredients can be turned into a $60 bottle of supplements.

I highly recommend that every MMA fan who is concerned about performance enhancing drugs in MMA. It might make you think.

*Note: The filmmaker's brother Mike "Mad Dog" Bell was found dead in a rehab center in Dec. 2008 after the making of this film. Apparently he also struggled with alcohol and painkillers in addition to steroids. Another casualty of the pro wrestling rock and roll lifestyle.