Share All sharing options for: Rapper DMX Talks Boxing Debut on MMA Nation on 106.7 The Fan 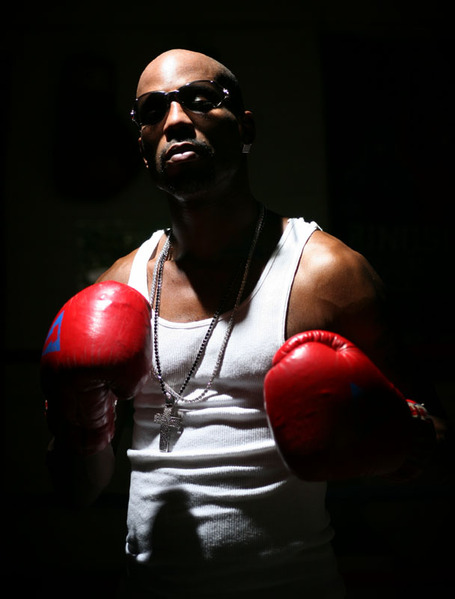 It's not everyday one gets to speak with a famous rapper, much less a famous rapper ready to take up a form of combat athletics for no obvious reason.

I had the opportunity to catch up with platinum-selling rapper and soon-to-be boxing competitor DMX on MMA Nation this past weekend. The interview can be heard in its entirety here, but I thought I'd put together a summary of what was discussed.

Oh, and for those looking for a new DMX album, he says first quarter of 2010 is the target time period for the release of his next body of work.

As for the rest of the interview, enjoy:

- According to his management, DMX has turned over a new, healthy leaf in his life. Why?

"For one, I was on probation. That was one reason.

I just realized it was about time, you know?"

- How the fight came about:

"We got a phone call, you know? Asking if I wanted to participate in it.

I was like, "Yeah. Why not?" I used to participate in…oh, nevermind. But yeah, I figured I could do it."

He said he has "a little bit" of boxing experience from "when [I] was younger, [I] stay in shape, so it’s nothing."

- On whether he’s training for the fight:

"I’m just going to walk in as it is, you know what I mean? It wouldn’t be fair if I trained."

On sizing up his opponent: "Well, he’s shorter than me. And I think he weights a little more than me." DMX lists himself as roughly 6 feel tall and approximately 175lbs.

On whether or not he’d box again if he wins this first fight: "You mean, like, professionally? I ain’t going to do too much of it. I’m not trying to have my face all messed up."

- On whether he watches boxing and who his favorite boxers are:

"Yes, I do. Zab Judah, Pretty Boy Floyd, and my man’s name. I can’t think of it right now, but that’s my man. Like these dudes that I’ve hung out with, you know what I’m saying?"

- And for my favorite exchange:

- On whether or not he's worried fighting in a state with no athletic commission: "I can fight for real, though, so it is what it is."

On who DMX has asked to be in his corner for this fight: "I have no idea…I haven’t even thought about that yet.

- On what song he'll play for his entrance music:

"Um, hmmm…haven’t thought about that either.

- Lastly, whether he now knows who Barack Obama is after first learning of him in a strange way:

"Yeah, yeah, that was kind of a joke…

When I told him that his joking "confused a legion of white people", he replied:

"Wow, well, you know, they’re confused about a lot anyway. "