Share All sharing options for: The Week in Quotes: October 11th - 17th 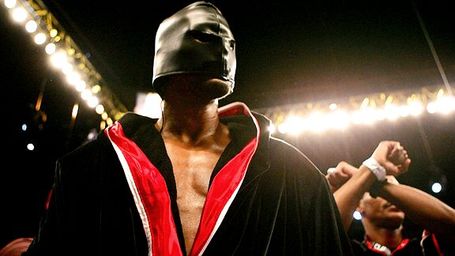 I MAY NOT LIKE TO WATCH MEN IN PANTIES WRESTLE, BUT I SURE LOVE TO TALK ABOUT IT

"Everybody is different but I don't want to watch two grown men wrestling with panties on. I'm from the hood, we don't play that." - Boxing legend Bernard Hopkins, just another in a long line of rank-and-file members of the homophobic Anti-MMA Movement (tm). (Boxing Scene)

"To me, I'm not buying a ticket to watch two grown men with panties on, sweating, with nuts in their face. That's not me." - Hopkins.  What if they weren't sweating?

YOU KNOW IT'S A SLOW NEWS WEEK WHEN...

"Kimbo's in the wrong sport. There's no doubt about that. Kimbo should be in boxing." - Former EliteXC monkey Jared Shaw.  Thank God Ariel Hawani caught up with him.  If only he had asked Skala his knowledgeable and coveted opinion on such important topics as the wars in Iraq and Afghanistan, the toilet bowl economy, and the Balloon Boy controversey. (MMA Fanhouse)

"I definitely want to fight GSP again." - UFC lightweight champ B.J. Penn, sure to ruffle the feathers of MMA "purists" everywhere.  I say fuck it.  Go get 'em, you crazy Hawai'ian.  (The Sun UK)

"There will always be people to beat and as the lightweight champion I have to honor that and keep defending the title. But as a businessman you hope it’s someone with a big name who can bring a big fan base into the fight." - Penn

"I am surprised Georges St. Pierre hasn’t tried to push for a fight with Anderson Silva. If I was the welterweight champion I’d try and push myself and see what I could do up at middleweight." - Penn.  I know what you would do, B.J.  I think the entire town knows what you would do.

YOU'VE GOT A BIG MOUTH.  NOW I'M GOING TO SHOW YOU A BIGGER ONE.

"I figured he would [call me out], but it made me laugh because his action was so predictable." - Dream lightweight champ Shinya Aoki, on Tatsuya Kawajiri calling him out at Dream 11. (Official Dream Site)

"During training, I told Caol Uno that I would borrow his words to retort if Kawajiri challenged me like that. Then, lo and behold, Kawajiri comes out dead serious. I just took it all in stride, because, come on, how did he think I would react?" - Aoki.  Crying, like you always do in the ring.

"I would like for them to give me a tomato can, like some low-level martial artist, so I can beat the crap out of somebody for a change and get a win streak going, but the way they work with me, it’s going to be somebody tough no matter who it is." - Trigg.  Didn't you do that the last two years on the minor league circuit?

"I think he won the fight. Some people say it might not have gone that way, but he definitely won the fight." - Donald Cerrone.  Jordan Breen later tweeted about the subject. (MMA Mania)

"Master Rafael [Cordeiro is] two or three years older than me and when I started, he was already a black belt. He’s very ugly, but he was famous and had a beautiful girlfriend, so it gave me hope that I could do well one day too." - Former Pride middleweight champ Wanderlei Silva, in no position to be calling other people "ugly". (Sherdog)

"I am very busy these days, I have a fight in Glory, then in DREAM.12 and after that I’ll fight in the K-1 Finals so I am very busy with training and fighting and I don’t have time for this bullshit." - Alistair Overeem, too busy fighting the likes of Tony Sylvester to be bothered by someone as insigificant as Brett Rogers. (MMARocks.pl)

"I think it was typical of people that don’t know anything about the sport. I know it’s for fun, but the second half of it really wasn’t even funny." - UFC President Dana White, on every romantic comedy ever made.  And the Simpsons episode satirizing MMA. (USA Today)

"I respect Brock Lesnar as a fighter, but I know I can fight with him. For me, I like the challenge." - UFC light heavyweight champ and super MMA badass Lyoto Machida, showing his aficion.