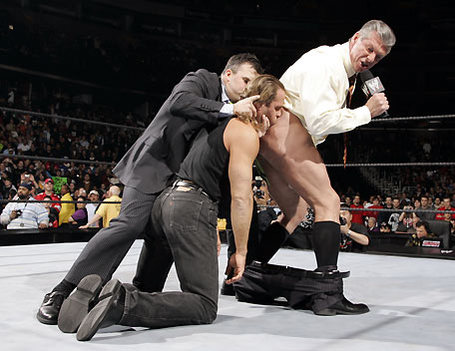 Is Vince McMahon really accusing the MMA of going to "extremes"? Yes, and boy is it rich:

During the peak of what the company refers to as its "attitude era" a decade ago, the WWE's audience was dominated by young men. While its popularity has waned, the fan base has simultaneously grown older and younger with new constituencies, according to audience research. A little more than a third of its audience is female. The audience is ethnically more diverse that most shows: 62 percent of audience is white; 20 percent of the viewership is black and 23 percent is Hispanic — Hispanics were counted as both white and Hispanic. It's the most-watched English-language show on cable among Hispanics, the company said.

With the Ultimate Fighting Championship and mixed martial arts becoming more popular as competitors, it made little sense for the WWE to ramp up the attitude with violence and sexuality, McMahon said.

"You really can't compete with that," he said. "Why not deliver a more sophisticated product and not go to those extremes? If the audience wants those extremes, they know where to go and how to get it."

Going PG has helped the company draw advertisers who might have looked away before. Pepsi, 7-Eleven stores, Mattel toys and the Army National Guard are among the sponsors that have signed up since the shift, the company said.

I'll let the picture do the talking for me. He can change the image, but he can't run from the track record.