Share All sharing options for: "Kimbo Slice Sucks"...Does It Matter? 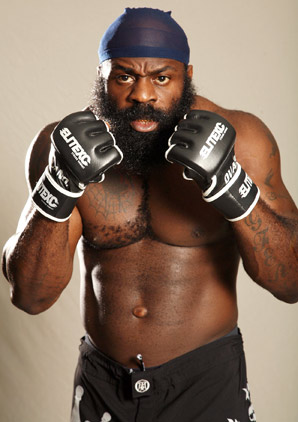 Last night we all got a fact reaffirmed that many of us knew all along.  To quote his new boss and promoter, Dana White, "Kimbo Slice sucks."  How much does it matter?  A lot.

Forgive me if I'm skeptical about his new training at ATT.  We've heard this story before, only it was Bas Rutten last time.  A lot of journalists and fans assume that all it takes is hard work to get good at this sport.  It takes a lot more.  Even if Kimbo trains every day, he probably will never be a competitive mixed martial artist at the elite level.

In 2008, Dana White bet on Brock Lesnar while Gary Shaw bet on Kimbo Slice.  White gambled on Lesnar because he hoped that Lesnar's amateur wrestling background and size advantage would make him competitive in an otherwise weak division.  It was a big gamble, and it paid off in spades.  The difference between Kimbo and Brock isn't just work ethic, it's ability, and that's something that isn't going to change.

They're already running cheap tricks by teasing Kimbo could come back.  I don't think he will.  If they're as smart as I think they are, they'll tease it over and over without delivering, and then announce Kimbo's next fight in December.  Who will he fight?  There are rumors he could drop to 205 and fight Houston Alexander, but I remain skeptical.  I think they will pair him up with whoever is the worst wrestler this season.  Sadly, Joe Silva's job is now to find fighters that with the right kinds of weaknesses so Kimbo has a chance.

At the same time, you can't ignore the benefits.  The UFC will bring these numbers to networks, who won't be able to deny the UFC's reach when the ratings in the 18-34 demographic rivaled all but the biggest NFL games.  I suspect these numbers will really help the UFC get the network deal they want.

Further, six million people tuned in to see Roy Nelson last night.  There is no other way six million people would have ever heard of Roy Nelson if not for Kimbo Slice.  All of those fans were also exposed to a barrage of UFC 104 advertisements, as well as a number of great lines from Rampage Jackson.  Nobody can argue that any of this is bad for the sport.

Looking at the UFC 107 card, I would guess at this point that it will do around 500,000 buys on pay per view.  Add in Kimbo Slice vs. Houston Alexander, and I'd bump my estimate to around 650,000.  That wouldn't just benefit the UFC, it would also benefit all the fighters that get bonuses based on how well the shows do.  Will BJ Penn complain if he makes another $500,000 if Kimbo Slice is on his show?  I suspect he'd be thrilled.

Dana White has some serious decisions to make at this point.  They wisely positioned Kimbo as an amateur looking to learn how to fight last night, and they could probably get away with putting him on Fight Night cards against other bad fighters for a year or two to bump the ratings.  None of that sounds too offensive, but it could become a real problem when a Fight Night features a guy like Gray Maynard who can't get a word in edgewise because the entire show is really based around Kimbo Slice.

Kimbo Slice sucks, and that matters.  These kind of promotional tricks work in the short run, but they don't work forever.  If he doesn't improve, and he can't win a fight, then he should not be in the UFC, regardless of whether he draws in big ratings.