Share All sharing options for: The Week in Quotes: January 24th - 30th 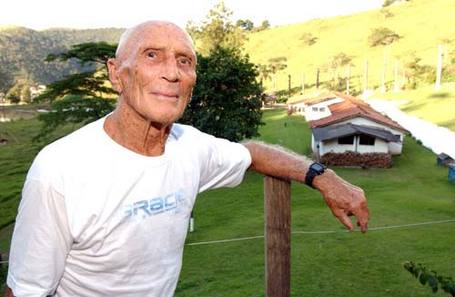 "I created a flag from the sport’s dignity. I oversee the name of my family with affection and nerves of blood,” said the Professor, as his last worlds." - Jiu jitsu grandfather Helio Gracie's last words. (Gracie Mag)

"Today my father, Helio, at the age of 95 passed on." - Former UFC champion Royce Gracie, in a statement on the passing of Helio. (Tatame)
"Many of you may think that the greatest thing my father ever gave me was Gracie Jiu-Jitsu. But I want all of you to know that I will remember him most for what he taught me off the mat. He taught me how to be a man, a husband and a father. He showed me how to be honorable, respectful and diligent. He taught me how to be a whole person." - Royce Gracie
"I ask that together we celebrate the remarkable life of my father, Helio Gracie. The greatest tribute you can to pay to my father is to continue to train and share Gracie Jiu-Jitsu, remembering to never lose sight of the fact that what you do off the mat counts more than what you do on the mat. Face life's challenges with confidence, dare to pursue your dreams and live to the fullest just as my father did." - Royce Gracie

"Thanks to this man, there are thousands of teachers around the world making a living from jiu-jitsu and thousands of fighters making a living from MMA. Without Helio Gracie, Rorion could not have brought Vale Tudo to the US and MMA would not exist, giving jobs to many fighters, promoters and managers and fun to millions of fans around the world." - Mario Aileo on behalf of Rickson Gracie (Cage Potato)

"I applied Udegarami. I thought he would surrender immediately. But Helio would not tap the mat. I had no choice but keep on twisting the arm. The stadium became quiet. The bone of his arm was coming close to the breaking point. Finally, the sound of bone breaking echoed throughout the stadium. Helio still did not surrender. His left arm was already powerless. Under this rule, I had no choice but twist the arm again. There was plenty of time left. I twisted the left arm again. Another bone was broken. Helio still did not tap. When I tried to twist the arm once more, a white towel was thrown in." - Helio's legendary adversary Masahiko Kimura, on their famous fight. (MMA Mania)

"Why fear death? I don’t need anything, I don’t have anything, I don’t want anything. I think it’s silly for somebody to be scared of dying. One should be afraid of being born. I have already told my children when I die I want a party, with no alcohol, no hell raising [general laughter]. But I want a party with music, food… I don’t know if you guys believe in reincarnation, but we all go and come back until the day we no longer have to return. My brother [Carlos Gracie, already deceased] used to say the fellow only stops returning to Earth when he mingles with the Whole. Even when you’re thinking just a little bit wrongly, you come back to continue evolving. Hell, my friends, is right here on Earth." - Helio Gracie (Gracie Mag)

WHAT IT MEANS FOR THEM

"Holding the belt would be very important and historic. You could win the welterweight title from a less important opponent and it wouldn't mean as much. The most important thing is fighting Georges St. Pierre." - UFC lightweight champion B.J. Penn, my savior from maple syrup (Cage Writer)

"I'm champion (already), my motivation is not to fight for the title. My motivation is to fight, to beat B.J. Penn. I'm very glad to fight him these great fights make great champions." - UFC welterweight champion Georges St. Pierre, dirty Canuck.

PLAY WITH THE PROS

"I’m praying everyday for St. Pierre, St. Pierre all the way, baby. For myself, for my camp and everybody, the mma fans...I’m going for GSP!" - UFC welterweight contender Thiago Alves, who probably needs a St. Pierre victory to get his title shot out of the way. (Cage Writer)

"He still has the same achilles heel, that he's had for a longtime. Is he going to be able to keep the pace that Georges is going to set for five rounds? Ultimately that will be his undoing." - Former UFC heavyweight and light heavyweight champ Randy Couture, who will be joining Fightlinker in a ceremonial pig roast. (Cage Writer)

"If BJ shows up in good shape, I think he can get his hand raised at the end. If BJ doesn’t show up in good shape, then he might have some problems." - Former UFC welterweight champ Matt Hughes, itching to say he was not impressed with GSP's performance (www.matt-hughes.com)

"You'd be a fool to believe that. That dude is stronger than most of the 205ers I've went against. Whenever we go, it's a battle." - UFC light heavyweight champ and St. Pierre training partner Rashad Evans, who also looked bad ass on the last episode of "Prime Time." (Cage Writer)

TITO ORTIZ, THE PLATO OF OUR TIMES

"Here we are with Seraldo Babalu, you did an awesome job, saw why you're a black belt in jiu-jitsu, getting an awesome submission there, I want to tell me what you see, let's go ahead and see by the fight, what you saw, in the ring." - Former UFC light heavyweight champ and hopefully one time Affliction in-ring interview Tito Ortiz, butchering Renato Sobral worse than Chuck Liddell. (Cage Potato)

"Yes, and uh, my back will be better in about three months, so I know all the fans would love to see me and you get it on. You know what, you're an awesome fighter, congratulations tonight. Everybody lets give a hand to Renato Babalu, one of the greatest light heavyweights, of the night." - Ortiz, the kettle is black?

"That was the old Vitor Belfort that we all want to see. Him at 131 years old. He’s back for vengeance." - Ortiz, giving Belfort a Biblical age.

"July 4th has come early." - Ortiz, because nothing says Independence Day like a Russian fighter's victory.

"Well the millions that are watching at home and the fifteen thousand and more in audience tonight, ladies and gentlemen, the pound for pound best heavyweight in the world today, Fedor Emelianenko, the last emperor, congratulations buddy." - Ortiz, what's the difference between that and just being the best heavyweight?

LARRY MERCHANT TOUCHES LITTLE BOYS.  PROVE TO ME HE DOESN'T.

"A celebrity who is here in bronze only. Oscar De La Hoya, the live version, is in nearby Anaheim, where his company got a $5 million fee from a t-shirt maker so that he would be personally involved the promotion of a mixed martial arts show. It would take that much, Jim, to get me to go to one of those things." - HBO World Champion Boxing curmudgeon Larry Merchant, talking out of his ass.  As usual. (Cage Writer)

"It’s ridiculous [to say] that there was a $5 million dollar fee paid .There’s a financial commitment obviously that Affliction made, and Oscar felt an obligation through his partners at Affliction. I don’t know how more simple it can be and why it’s any more complicated than that." - Golden Boy Chief Marketing Officer Bruce Binkow, explaining Oscar's absence at Mosely/Mararito in favor of Affliction's "Day of Reckoning." (Sherdog)

"The $5 million was the number thrown out. There was not a discussion on how that precisely was allocated or how it was branded. Is it a little bit glib or short-handed to say that Golden Boy got $5 million and Oscar had to be there? Yeah. Yeah. I’m on television and I’m trying to tell a story as tightly as I can." - Merchant, shocking, an old man who doesn't know what the fuck he's talking about.  (Sherdog)

SPEAKING OF HBO, WHAT DOES THE WOMAN BEATER HAVE TO SAY?

"I think in a hundred years from now it will be interesting to see how variegated their experience is." - Lampley

"And you know, I used to think of this in terms of "I like boxing because it’s better." But now I think of it in terms of "I like boxing because it’s boxing" – and some people like MMA because it’s MMA. It’s no better and no worse, it is what it is. And I think there’s room in the cultural marketplace for both." - Lampley, now I can finally sit back and enjoy your work without thinking you're a gigantic douche (though you still pleaded no contest to domestic abuse...)

"I did pretty good in the first few minutes. But then I tried to do something flashy and paid for it. I have to sit down with myself and figure out why I didn’t listen to my trainers" - Arlovski, who I picture saying this in a soft voice while a tear slides gently down his cheek. (Cage Writer)

"I didn't really think I was in any danger in the fight. I felt comfortable with where I was during the fight. I felt after a while I was able to counter his attack." - Emelianenko, with his usually badassery.

"All my hard work and training, I just threw it in the toilet." - Arlovski, says it all himself.

"He made a young man's mistake. It was too easy for him. He was winning the fight handily I thought, controlling the fight like we planned." - Arlovski's boxing trainer Freddie Roach, disregarding the notion that winning the first three minutes of an MMA bout means next to nothing. (MMA Weekly)

"But Fedor swings hard, that's his thing. He probably had his eyes closed, but he just got lucky, I think." - Roach, Fedor gets lucky a lot.

OH, AND HE DID IT WITHOUT REALLY TRYING?

"He's obviously got unbelievable potential, but he had some distractions getting ready for this fight. The movie. The commercials." - Fedor's trainer Vladimir Voronov. You know how Fedor rolls - late nights at the club, a harem of women everynight... (Sports Illustrated)

"If Fedor wants to keep winning, and winning well, he needs to train professionally. Right now he won with his old tricks." - Voronov, Fedor is fucking sick.

"I’ll be back whenever." - Matt Lindland, sound ing anxious to get back into the ring after getting blasted by Vitor Belfort. (MMAInsider via Fightlinker)

"I also know that he's training with Randy Couture and Master Toddy and (Floyd) Mayweather, all these top notch trainers. I'm sure he's gonna have slight ring rust but I've prepared for him to be an absolute monster." - Jon Jones, hopefully not insinuating Stephan Bonnar's being chained to his bed in order to make weight. (Cage Writer)

"I will never feel free in the UFC." - Fedor Emelianenko, creating labor slogans for fighters. (M1MixFight.com)

"Next show it’ll be me and Fedor. We’ll see, that could be one of the options. I wouldn’t have to move up much in weight, I just won’t drop any. I’d just fight at my natural weight. I drop at least 10 pounds to fight. I wouldn’t have to drop anything and it would be a good opportunity." - Former UFC light heavyweight champion Vitor Belfort.  Good to see the "old Vitor" back? (Gracie Mag)