Share All sharing options for: Gambling Spotlight: Betting on UFC 94 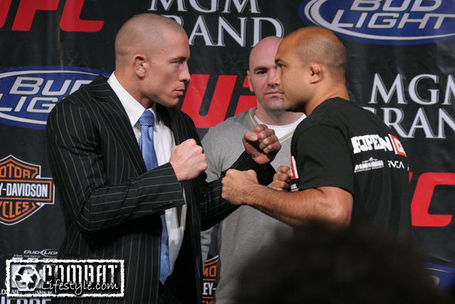 B.J. Penn is being undervalued by the MMA community.  To listen to commentators talk about the bout, you'd expect Georges St. Pierre to be in the neighborhood of a -500 favorite.  Georges has apparently made huge strides in the three years since an undermotivated Penn narrowly lost to him in 2006.  And Penn has bad cardio.

I think both of those axioms are overstated.  Penn certainly lacked elite cardio when he lost to St. Pierre in 2006.  He slowed down in the fight.  But he never gassed out like Shogun Rua in the UFC.  Penn remained competitive in the last half of their first fight.  He has also gone five rounds twice before in his career.  From a Rami Genaur Yahoo article leading up to Sherk/Penn:

In fact, in his fight against Uno, Penn actually got stronger in the later rounds, fighting with greater effectiveness in rounds four and five than he did in rounds two and three.

Considering the magnitude of this fight, there's no reason to think Penn won't come in the best shape of his career (barring unknown injuries of course).  St. Pierre's cardio will continue to be a strength for him, but I don't feel the need to fall in line with the "Penn wins rounds one and two, St. Pierre takes the rest of the fight" camp (which was heavily prevalent in the Sherk fight, and look how that turned out).

In fact, a five round fight theoretically favors an in-shape Penn.  Penn is more likely to finish St. Pierre than vice versa.  Two more rounds becomes ten more minutes for Penn to land a heavy strike or lock on a submission.

St. Pierre, meanwhile, will likely have to grind out a decision.  He's certainly capable of it; don't let my Penn lovefest fool you.  Taking and keeping Penn on the floor will prove to be no easy task, but Georges possesses the tools to accomplish just that.  And he can't become comfortable with the idea that he can lose the first two rounds and make up for it late in the fight.  He should push Penn early and work for takedowns often.  Even if Penn defends, he'll have burned enough of B.J.'s energy so he can push his cardio edge later in the fight.

But that's ultimately why this fight is so dangerous for St. Pierre.  A mistake made by B.J. ends up with him on his back.  GSP takes a misstep and he might wake up to Penn throwing strikes from the top.  It's so easy to forget Serra/St. Pierre I because Georges avenged the loss convincingly.  But there's no doubt that B.J. poses not only the biggest striking threat since that fight, but in his entire career.

The only play I recommend is Penn at anything above +140 or so.  If I'm a GSP fan or bettor, I'm very unhappy if I don't see Georges immediately shooting for takedowns after the opening bell.  His gameplan should center on pushing his cardio edge.  Penn, meanwhile, needs to constantly work towards finishing.  If he gets taken down, he should look for submissions or opportunities to get back on his feet.  Standing, he can find the same sort of success with his jab that he found against Sean Sherk.  He can then work off the jab with power shots and knees. 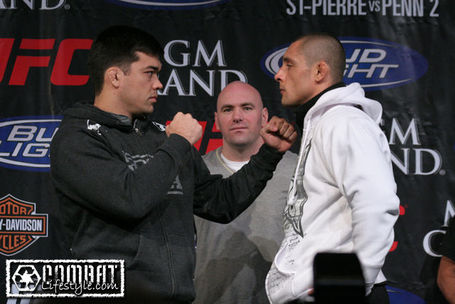 I'm having a hard time articulating the point because it's evident to me on so many levels. This will arguably be Machida's toughest fight to date. Afterall, Silva posseses a more dynamic top game than Tito Ortiz and better overall standup game than Sokoudjou.

The reverse, however, does not hold true. Machida will clearly be Silva's toughest opponent to date and by a very large margin. You lack an impressive fight card when you can debate whether your biggest test came from Tomasz Drwal (in a fight that Silva noticably gassed) or Antonio Mendes (who rocked Silva at the start of the first round).

Machida presents loads of problems for any fighter, and he's an especially bad matchup for Silva. Thiago likes to press the action, though not as wild or aggressively as per his reputation. This falls right into Machida's hands. Lyoto fights like a matador, and Thiago's just another bull for him to stick.

At this point, everyone knows Machida is "elusive" (or he "runs" for you cretins out there). He achieves that through excellent footwork, head movement, and timing. He seems to have a good chin which we witnessed in his fight with Sokoudjou (who obviously hits like a Mack truck). Like Anderson Silva, landing a knockdown blow on Machida is like swimming across a moat, climbing over castle walls, and then forcefully breaking down the gate. That is to say, not an easy task.

Silva's best option is taking the fight to the floor. He'll hit a couple stumbling blocks there as well. First, Machida showed very good takedown defense in his fight with Tito Ortiz. His ability to pummel for underhooks impressed me the most in their clinches. Second, Machida has very good jiu jitsu. He immediately swept Sokoudjou upon being taken down and worked a very patient top game until he finished the fight via side choke.

In my opinion, Silva just doesn't have the skillset to beat Machida. The only fighters at 205 that I don't have Machida as a intuitive favorite against are Quinton Jackson and Rashad Evans. Patient strikers who hit hard, move well, and have quality ground games. Jeez, who does that sound like?

I recommend a very big play on Machida. He's good up to -400 easily, and if you're as big on him as I am, you'll find value past -500. I see the fight playing out in two ways. Either Silva fights patiently and gets outpointed in a decision or he makes true on his word, chases after Machida, tires, and gets finished in the second or third round. If I was a tout service, this would be my Super Bowl Weekend LOCK OF THE YEAR.

It's the classic prospect vs. veteran coming off an injury fight.  Jones showed an interesting mix of Greco-Roman wrestling with flashy standup technique in his fight with Andre Gusmao.  Bonnar is Ken to Forrest Griffin's Ryu - a slightly inferior carbon copy (commence Street Fighter II debate!).  They're both listed as 6'4", though Bonnar seems like he'll be the bigger of the two fighters.  Regardless, without much tape on Jones or knowledge of Bonnar's recovery it's hard to handicap the fight.  I expect the fight to rest on whether or not Bonnar's healthy as he's more than capable of beating the non-elites at 205.  Back off unless you have inside info.

If this fight ends up going down*, I like a play on Kim here.  The line has moved significantly in the past 24 hours (I think people are piling on Kim after news that Karo might be injured and is considering pullint out of the fight), so the play isn't as good as it was a couple days ago.  Still, even if we disregard the injury rumors, Kim's judo should neutralize Karo's.  Kim's strikes well, and his ground 'n' pound will give Karo fits if he can get on top.  Take Kim for a unit, and hope this fight is on.

* - In the event that this fight gets canceled, I expect Fitch/Gono to get promoted.  So, I'll give you a tip on that...do not bet Gono.  If you're comfortable laying a lot of chalk, you can grab Fitch at any number near -600 and below.  Otherwise, stay away.

Just looking at their ability to finish in high level fights should give you an idea of who's the favorite here.  Guida's relentless and wild style will fall right into Diaz's gameplan.  Nate won't encounter the same problems he had with Josh Neer, who is one of the biggest lightweights in the UFC.  Guida, who could fight at 145, still won't have problems taking him down, but he won't be able to control him there.  Guida has subpar standup and doesn't hit nearly as hard as the bigger Neer.  I expect this fight to hit the ground and Diaz to look on a submission at somet point.  Take a unit on Diaz here.