Is Thiago Silva Really a Threat to Lyoto Machida?

Share All sharing options for: Is Thiago Silva Really a Threat to Lyoto Machida? 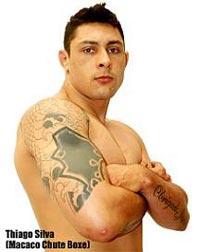 Lyoto Machida v. Thiago Silva is being promoted as a battle of top undefeated fighters, but I think there is a serious difference in skill level that will lead to a very one-sided fight.

Thiago Silva is undefeated, but a quick look at his record and wins raises a number of questions.  He beat Houston Alexander and Antonio Mendes in one round, but then again, so did Eric Schafer.  He got a freak injury win over Irvin, and won a very ugly slugfest with Drwal.

I've seen him tagged over and over again on his feet by James Irvin, Tomas Drwal, and Antonio Mendes.  I don't see any way he can come close to competing with Lyoto Machida in a standing fight, and I don't think he has the wrestling to bring things to the ground.

Obviously a guy with his power could land a shot and hurt anyone, but none of his fights make me think he can hang with Lyoto.  The only place this is a close fight is on the ground, where both are black belts.  It seems to me that Thiago's best chance at a win is to work as hard as he can to put this on the ground.  Even there he's probably at a disadvantage, but at least it is close.