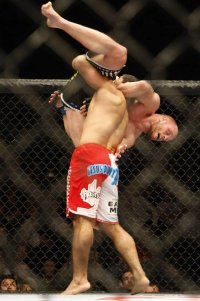 On my first viewing of UFC 93, I thought it had been a dry spell for Judo Chop worthy technique. Sure Alan Belcher's guillotine was sweet and Marcus Davis' counter-punching was tasty and Dan Henderson used his big overhand right to set up a nice takedown in the first round....but none of those moves really inspired me.

What did catch my eye was Rousimar Palhares' big slamming takedowns on Jeremy Horn. Sure Horn did a really good job of neutralizing Palhares' vaunted jiu jitsu, but he found himself flying through the air on two occasions thanks to Rousimar's use of excellent wrestling technique.

This first shot comes from the beginning of the second round. Toquinho had stunned Horn with a left hook/right hand combination which created the opportunity to shoot in for a high crotch single leg takedown. He wrapped his right arm around Horn's left thigh, put his head on the right side of Horn's gut (but keeping it close to the body to avoid a guillotine), and hooked his left arm up under Horn's crotch. Next step, elevation.

The force of the slam busted Horn's guillotine attempt. Palhares landed in Horn's guard and quickly passed to 1/2 guard.

When people say takedowns shouldn't score points in MMA. I just don't know what kind of MMA they want to see. Landing a takedown like this is the definition of controlling where the fight takes place and imposing your will on the opponent. Plus big slams are eye candy and just the kind of action I want to see in the cage. 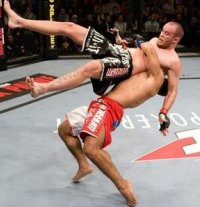 This second one is even prettier. At the beginning to the third round, Palhares misses with a looping right but when Horn ducks under it and fires back with a left hook, Rousimar ducks under and gets a bodylock on Horn, then slips to his back, voila, German Suplex:

Technically known as a belly to back waist lock suplex, the wrestler stands behind the opponent, grabs them around their waist, lifts them up, and falls backwards while bridging his back and legs, slamming the opponent down to the mat shoulder and upper back first. The wrestler keeps the waistlock and continues bridging with their back and legs, pinning the opponent's shoulders down against the mat. The move was innovated by Lou Thesz but named by Karl Gotch, a German wrestler.

Toquinho varied the classic suplex by releasing his body lock in mid-air, freeing his right arm and landing in side mount but the concussion and bouncing allowed Horn to quickly get to half-guard. Nevertheless, it was a showcase move that imposed his will, damaged his opponent, and put him in dominant position on the ground. This is what modern MMA is all about. Palhares is a world-class BJJ player but what we're seeing from him is pretty pretty wrestling technique explosively applied.

Here's a gif of the suplex:

About the name of this feature: I chose Judo Chop because it’s an utter misnomer that is sometimes used by poorly informed MMA commentators during fights. It’s also from the Austin Powers movie. I chose it because it reflects my own lack of expertise and what this column is: my stumbling along in the dark trying to get a handle on the technical aspects of the fights. The techniques featured here will sometimes involve judo but not always. Sorry if that's confusing.