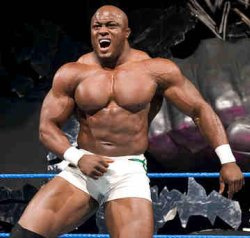 “I would like for Bobby Lashley to be victorious by way of knockout. Everyone wants something like that. But we’re not just going to steer completely away from the wrestling. It will turn into a wrestling match. But at the same token he’s been training jiu-jitsu as I have and we’ve both been training standup. So I think it’s just going to be a brawl. We’re both two big athletic heavyweights with quick hands, hard punches and quick takedowns. It’s going to be a brawl.”