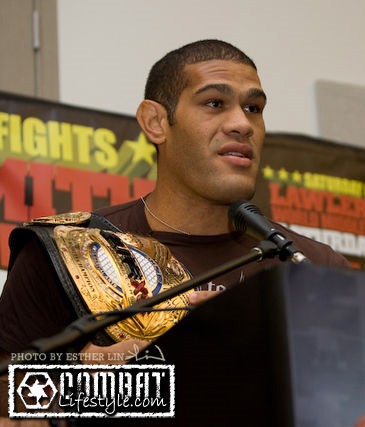 Suspended fighter Antonio Silva filed a civil action against the California State Athletic Commission on Jan. 7 in Los Angeles Superior Court, the first known case in which a mixed martial artist has legally contested a CSAC decision outside the state regulatory body.

Silva is asking for a "writ of mandate," or a ruling from the court that will supersede the CSAC’s decision to suspend the fighter for one year for alleged steroid use and possibly allow Silva another hearing to try and prove his innocence.

Second, Fighters Only is reporting that Silva may face Aleksander Emelianenko in his next fight. This is kind of a battle of fighters banned by CSAC -- Silva for failing a steroid test, Emelianenko for "unspecified health concerns."

For my dollar I just think the whole thing is a bummer. Here's a fighter with enormous potential who has managed to get caught in the EliteXC disaster, get himself on the wrong side of one of the most messed up athletic commissions in the country  -- they're so on the ball the guy who administered Silva's suspension had to resign in disgrace and the testing procedure under which Silva was busted was so awful that the new leadership of the CSAC has allowed events to go without testing fighters rather than use the old system -- and is now seemingly going to spend the rest of his career exiled to Japan fighting guys who can't make it in the States for one reason or another.