Share All sharing options for: Fight Lines: The FAQ

In my semi-annual round of self-indulgence, a Google search reported that a few message boards had discussed Fight Lines recently.  What I found was mostly confusion and derision caused by not understand what was going on.  For instance, from the forums at MMA News:

I'd like to point out how much I disagree with the way he comes to "GSP = Serra."

Of course, anyone famililar with the system understands that the phrase "GSP = Serra" simply refers to the split record they have with each other that loops out the result from the graph.

So, in the interest of increasing knowledge and having a post to link back to, I'm creating this FAQ.  I encourage additional questions in the comment threads for anything I don't touch on here.

First off, what's the point?

Fight Lines started as an attempt to rank fighters by division, mimicking the work done at Beatpaths (a similar system for the NFL).  Unfortunately, aspects of the fight game caused issues for Fight Lines to operate as a traditional ranking system - most notably the amount of fighters in the world and the lack of consistent competition among each other in a reasonable amount of time.

After putting the project to rest for a period of time, I decided there was still some value in a graphical representation of fight results.  Most obviously, it puts a chaotic amount of data in one place, in an easy to read format (some may disagree with that last part).  It also has use as a tool for matchmaking purposes.  It's also, in my opinion, fun to look at.

The more work I do with it and the more samples pile up, the more useful it will become.  I also suspect they will do a good job of showing how the divisions change over time.

Currently, the criteria to get on the graph goes a little like this.  First, I take all the fighters listed in the Bloody Elbow meta-rankings.  I fill out an Excel spreadsheet with their records for the past 3 years.  Any additional fighter that appears twice gets added.  I do not look at their entire record; I only look for fights between the second tier of fights.  Using this criteria, we usually end up with 35-50 fighters for any given weight class.

Before we go any further, let's look at the meat and potatoes of Fight Lines: the graph and loop report. 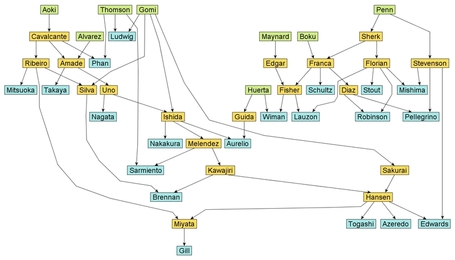 This data comes from the lightweight graph back on July 8th.

What are these loop things?

A loop occurs whenever you can't discern a clear hierarchy for the fighters involved.  For instance, let's take the recent fights between Chuck Liddell, Keith Jardine, and Wanderlei Silva.  Chuck beat Wandy, Wandy beat Jardine, and Jardine beat Chuck.  If you put that on the graph, you'd end up with this: 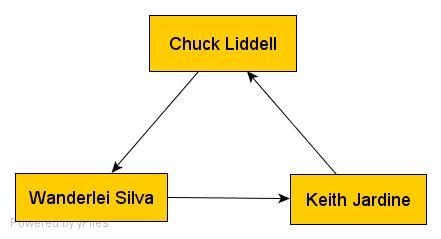 Because there is no objective way to say any of these fighters deserves to be placed over any others in a path, you simply remove the loop.  The "X > Y > Z" notation is simply a written description of the removed loop (X = Y occurs when two fighters split a pair of fights).

It should be noted that a loop can contain as many fighters are available on the graph.

What is this graph telling me?

As I said, this is a work in progress, and I believe a lot of useful data has been left uncovered.  However, you can read into a few things.

First, the basics.  I've recently started to use a color system to clarify paths.  Fighters in green are at the top, blue are at the bottom, and yellow are somewhere in between.

I initially thought where the graph software placed fighters on the graph had zero merit.  However, I'm starting to believe otherwise.  Now, Fight Lines will never be an accurate ranking system on its own.  However, if the graph is balanced correctly (in terms of which fighters are included), I think the general hierarchy of the division emerges.  Still, until I do more research, don't put too much stock in the level placement of fighters, especially those at the bottom ends of paths.

The general shape of a graph can tell you a lot about the state of a division.  A vertical or pyramid shape indicates a pretty structured division without a lot of ambiguity.  A more horizontal graph generally means that a lot of the top fighters aren't fighting each other for whatever reason.

I mentioned earlier that Fight Lines could be used to assist with matchmaking.  There's a couple different options.  First, for guys towards the top, you want to look laterally for guys at similar positions in other paths.  These fights will narrow the graph.  Guys low on the tier want to match up with fighters above them, preferably on their path.  Winning such a fight, in most instances, causes their loss to be looped out.

As a general rule, the more fighters you are connected to, in either direction, the more weight is placed on your position on the graph.

So why should I care?

Well, I'll be completely honest.  I'm not sure if Fight Lines is for everyone.  Personally, I've always had a very logical way of thinking about life, sometimes to a fault.  I'm intrigued by patterns and obsessed with objectiveness.  I think most things can be described or explained with some aspect of mathematics.

That being said, I think people who relate will be able to draw more from Fight Lines than others.  For those who may be more right or neutral brained, it's important not to be overwhelmed by a graph.  Break it down.  Look at each individual path.  Try to find patterns.  If you have to, put it in Paint or Photoshop and crop out individual sections.

So, go ahead and ask questions and offer your thoughts.  What would you like me to explain more?  What kind of analysis do you like seeing?  Is there anything I can do to help with the graphs' clarity?  Let me know!