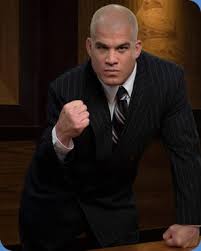 I didn't watch a single episode of the show, but I'm happy for Tito. I find the vitriol catapulted his way to be the histrionics of keyboard warriors with too much time to waste. And apparently, Tito didn't do half bad on the show, although Cage Potato wasn't that impressed. Notable quote:

But Trump was so impressed with Ortiz's performance on the show that he gave the HBBB $50,000 anyway for his charity. He called Tito "really special" and "the best there is," which is strange because Ortiz honestly didn't do that well on the show; he never got a chance to show off his leadership skills or business acumen, and only lasted as long as he did by hiding behind the greater failures of others. It reminded me of that SNL sketch "The Sinatra Group" where Frank Sinatra (Phil Hartman) tells 2 Live Crew's Luther Campbell (Chris Rock) "you don't need to work blue, kid, you got talent," and Rock is like "no, I really don't." I wish that video didn't cut off in the middle so you could actually see what I'm talking about.