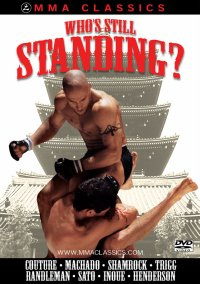 After a little break, here we go again with another installment of my MMA History series. So far I've slogged all the way to 1997 in sixteen installments.

Like the other camps, the RAW Team consisted of fighters coming from a single style, in this case, Greco-Roman (and some freestyle) wrestling. Chiapparelli was a 1987 NCAA national champion wrestler from the University of Iowa. He had trained BJJ with Renzo Gracie in the early 1990s while living in New York.

Here's Rico talking to MMA Memories about how he got to idea to start the team:

MMAMemories.com: Can you recall your first memory of MMA? The first time you actively took a step into it?

Rico Chiapparelli: "When I went to see the first fight in Birmingham, Alabama, Renzo Gracie vs Oleg Taktarov. I to see him fight along with a wrestling friend of mine, Tom Erikson. A manager at the time had all the top wrestlers - Severn, Randleman, Coleman, Frye, Kerr… They had a falling out. Erickson asked me to corner thing, a very common thing amongst wrestlers. So I cornered Erikson but in the finals he fought (Murilo) Bustamante a Brazilian jiu-jitsu guy. At the time I was unlearned in the MMA arts. After the show I was informed that this was a business & how the BJJ make their living. I thought, Well, then this is how the wrestlers can make a living also. It was clear early on that anyone who could really wrestle would do very well in MMA. We formed the Real American Wrestling team, also know as RAW.

Rico had already dabbled in BJJ by training with Renzo Gracie before traveling to Atlanta. Renzo wasn't amused that Rico had cornered Erikson against a BJJ fighter and basically made him unwelcome after that. Nevertheless, Rico's open-minded approach to grappling informed his team's approach to MMA.

The first event where the R.A.W. Team made a splash was at Brazil Open 1997. The event was fought in a cage and featured two tournaments. R.A.W.'s Tom Erikson won the heavyweight tourny, beating Hammer House fighter Kevin Randleman via KO standing. R.A.W's Dan Henderson also impressed, beating BJJ black belt Crezio de Souza en route to winning a four man tournament. I remember being particularly impressed that Erikson could handle himself on his feet and that Henderson won his final via guillotine choke.

The reputation the R.A.W. Team had in the late 1990s was that they were wrestlers just as good as the Mark Coleman/Kevin Randleman Hammer House but not meatheads. Where Coleman and company just stuck to their wrestling, the R.A.W. Team fighters worked submissions and stand-up, if just for defensive reasons.

Rico has obtained the rights to these fights and several more classic bouts from the 1990s. He's selling a great compilation DVD "Who's Still Standing" at his MMA Classics web site. i recommend it highly if you're interested in the legendary matches of the 1990s. Plus unlike most fight DVDs you buy, one of the pioneers of MMA is actually getting paid when you order this one.

The R.A.W. Team really made their mark when Randy Couture stepped into the Octagon to face Vitor Belfort at UFC 15 (video). Here's how Matt McEwan describes the build up to that fight at 411 Mania:

...a title elimination fight between the "Phenom" Vitor Belfort going against the undefeated Randy "They haven't given me any of my nicknames yet" Couture. Belfort had destroyed everyone he had faced in under two minutes, and while Couture had looked good in winning the tournament in his debut, he id a HUGE underdog coming in here. The UFC were attempting to build around Belfort as their golden boy, and were attempting to pave the way to the title for him with opponents they felt he matched up well with.

That fight is one of the true landmarks of MMA history. Both men are still well known fan favorites fighting at the top of the sport and its outcome set the template for their future careers: Randy Couture the guy who comes out of no where to win the big fights as an underdog and Vitor Belfort, the sometimes amazing striker who has never won the big title or lived up to his potential.

The R.A.W. team also included Frank Trigg and Vladimir Matyushenko, both fighters who were ranked in the top 25 throughout the 2000's.

In the full entry I've included one of the great feuds of the late 1990s -- Igor Vovchanchyn vs Nick Nutter, 1 and 2.

This was a classic late 1990's feud. Legendary Russian kickboxer Igor Vovchanchyn had already been building quite a reputation before he ran into Mark Coleman protege Nick Nutter at IAFC in November 1997.

Igor had already won five single day tournaments when he collided with the much bigger freestyle wrestler in the only major MMA event to have been held in Israel in the 1990s.

Nutter was a promising Hammer House fighter who easily rolled to the finals of both MMA tournys he entered. Unfortunately for his MMA career, Igor V. was waiting for him both times.

The first fight is a little slow, jump ahead to the third installment if you want to see Igor win via headbutt -- from the bottom!

A few months later, the two met again, this time in Brazil at WVC 5. Igor makes much quicker work of Nutter in this one in a fight that would be a template for how to beat wrestlers in MMA -- knee them in the face when they shoot for the takedown.