Share All sharing options for: MMA History XIII: Coleman Gets His Kicks

All fights matter to the fighters in the cage but some fights MATTER. Every once in a long while a fight takes place that impacts not just the careers of the fighters involved, but the very course of the sport. One such fight happened on July 27th 1997. No less an authority than Big John McCarthy cites it as one of the three most important fights in UFC history:

In UFC 14, Mark Coleman was dominating everyone with his wrestling ability and he fought Maurice Smith, a kickboxer. Maurice won the fight and showed that strikers can win.

In case you don't recall, at the time Mark Coleman and his groundNpound style of fighting were at the absolute apex of the MMA world.

The fight is a little long but well worth a watch if you can track it down. Matt McEwan has a blow by blow of the match at 411 Mania. His lead in establishes the tone at the time:

The slightly subtle theme of the evening has been the dominance of wrestlers in MMA, as both tournaments were won by wrestlers (Mark Kerr and Kevin Jackson) and all the hype videos concentrated on the dominance wrestling had been showing in the MMA world.

Before the fight, Coleman says this is a grapplers game, and unless Smith has learned to wrestle, he is going to lose.

Those who had been following MMA closely weren't entirely shocked however. Smith had just beaten a much larger grappler in Marcus "Conan" Silveira at EFC 3 using the same game plan he used against Coleman -- use jiu jitsu to survive the ground and pound and then get back to the feet. Smith had not only been fighting in Pancrase for a few years, he'd also formed "The Alliance" with Frank Shamrock and RINGS fighter Tsuyoshi "TK" Kohsaka. And sure enough, against Coleman the gameplan worked to perfection. Smith's two wins proved conclusively that a fighter with a big advantage on the feet and good defense on the ground could beat even the most powerful one-dimensional grappler.

In a previous chapter, I've covered the rise of several other pioneers of the striking approach to MMA: kickboxer Igor Vovchanchyn, dirty boxer Don Fry, and Muy Thai fighters Pele Landi-Jons and Wanderlei Silva, but Maurice Smith was the first to prove that a big advantage in the striking arts could overcome a major deficit in grappling. 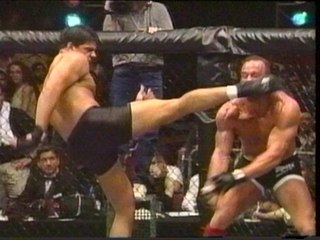 Unfortunately for Mark Coleman, he came back at UFC 17 and was on the wrong end of a second shocking upset. This time to Lion's Den fighter Pete Williams. Take a look at the classic KO kick to the head. John Salton of UFCScene has a good write up of that fight:

UFC 17’s subtitle was an allusion to the return of former champion Mark Coleman, who was coming off his upset loss to Maurice Smith. Originally slated to face Randy Couture in the main event, Coleman was instead matched up with Pete Williams. Williams was a student and training partner of Ken Shamrock. For the first half of the fight, Mark Coleman looked as dominant as he had ever looked, following the ground and pound blue print that had earned him his championship in the first place. Williams, however, had brought a blueprint to the fight as well. It was the same blueprint that Smith had used to defeat Coleman. The blueprint could not have worked more flawlessly. When the fight was restarted for the overtime period, Coleman was exhausted and barely moved from his corner as Williams stalked across the Octagon and began peppering him with punches and leg kicks. With little time remaining in the fight, Williams brought a kick high. Coleman reached down with both hands, as he expected another leg kick. What he got, instead, was crushing blow to his jaw that left him glass-eyed as he lay against the fence. The entire building erupted.

I've thrown in a Mark Kerr fight from Brazil since his UFC fights don't seem to be online in the extended entry. Kerr never had a tough fight in the UFC and made his way to Japan where he would meet his own downfall.

The other fighter making big waves in the UFC around this time was Carlson Gracie protege Vitor Belfort. But it wasn't Belfort's BJJ (which has still never been proven) that was amazing people, it was his smooth and powerful boxing skills. Watch his UFC debut against highly touted Lion's Den heavyweight Tre Telligman from UFC 12. Belfort won a four man tournament that night and went on to demolish Tank Abbot at UFC 13 (video). We'll talk about Belfort's fateful encounter with an unknown named Randy Couture in a future installment.

The other key events in the UFC around this time were in the newly formed 200lb "middleweight" division. At UFC 13, the new 200lb division debuted with a four man tournament featuring the Lion's Den fighter Guy Mezger, Shooto star Enson Inoue, and former NCAA national champ Royce Alger. Inoue shocked most observers when he beat Alger with an armbar. But he also suffered an injury that let unknown alternate Tito Ortiz squeak into the finals. Mezger won quickly with a guillotine but the future would be different.

At the next UFC, Olympic gold medalist Kevin Jackson, fresh from destroying John Lober at the same Extreme Fighting event where Maurice beat Conan, debuted at UFC XIV and plowed through a 4 man tournament. Jackson was expected to be the first UFC 200lb champion. It was rumored that Enson Inoue would return and face him for the belt . Events played out differently as we will see.

As a tease for my next post on events in Brazil, here's a clip of Oleg Taktarov's greatest moment -- a KO of Carlson Gracie heavyweight Sean Alvarez.