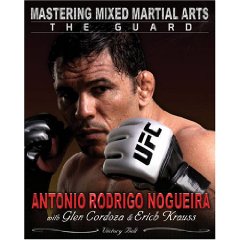 It's getting kind of repetitious telling you guys about how good Victory Belt's MMA instructional books are. But I sure enjoy reading them so, you'll just have to deal.

As with Anderson Silva's MMA Instruction Manual, Big Nog's partnership with Victory Belt will result in multiple books of which THE GUARD is the first volume. Erich Krauss tells me the other two books will cover his top and back control games plus standing striking, guard passing and more. They plan to complete the series in 2009.

The volume in hand is a very informative text and Big Nog is the right author to talk about the guard in MMA. Nogueira shares his insights on how to execute many of the slick sweeps and submissions we've seen him use to win championship belts in PRIDE and UFC (the only fighter to ever hold Heavyweight belts in both promotions).  He is very specific about grips and the photos clearly illustrate what he's talking about.

The book includes sections on Posture Control, Double Arm Controls, Inside Hooks Guard (aka Butterfly Guard), Half Guard and Downed Guard. Each section is designed to be read in sequence as Nogueira shows how he transitions from one attack to the next, using his opponent's defensive moves to set up his next attack.

As always, I find the insights I glean about the author's approach to MMA as interesting as the techniques themselves. Big Nog clearly views the guard as an offensive position -- in the introduction he says he always pulled guard in jiu jitsu competition because he felt from his back he had four limbs to attack with, whereas he would only have two free limbs from top position.

Its always enlightening to read a true master's approach to the game. Big Nog has his own take on numerous basic moves. If you're familiar with other BJJ instructions, you might be surprised by his grip for the rear naked choke for example.

The introduction, which tells Minotauro's life story, is also a compelling read. He talks about his childhood, his introduction to the sport, the tragic injury that nearly killed him at age 11 (he was run over by a truck), and training with his twin brother Antonio Rogerio Nogueira. Interestly, the introduction skips over his third fight with Fedor after talking about the first two matches at some length. Nogueira is pretty clear that he felt he was winning their second match before Fedor threw an illegal headbutt and cut himself, necessitating a stop to the fight.

All in all this is an excellent book and has me very eager to see how Nogueira uses his amazing guard work to get the best of Frank Mir this Saturday. Only one fighter has ever really shut down Big Nog's guard game, and Frank Mir is no Fedor.