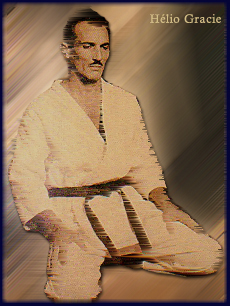 Yesterday was Helio Gracie's 95th Birthday.  If one man can be said to be the Grandfather of MMA, Helio Gracie is that man.

A Brazilian, Helio and his brother Carlos kept traditional jiu jitsu alive during an era when Judo reigned supreme in Japan. They learned their jits from immigrant Mitsuyo "Count Combat" Maeda.

They also picked up Maeda's habit of engaging in challenge matches with anyone who would take them on.

On a tactical level, Helio's biggest contribution to the martial arts were probably the refinements he made to jiu jitsu to emphasize leverage over strength and maximize the chances of little skinny guys like himself against bigger, stronger opponents.

But his influence is so much greater than just what he did in the ring. The clan he founded essentially invented and popularized modern MMA. First in Brazil from the 1940s on and then in the USA and Japan in the 1990s.

His sons Rickson, Royler, Royce, Relson and Rorion all became legends of martial arts and each made huge contributions to MMA in the 1980s and 1990s.Helio taught them all an almost insane level of toughness and will to win.

His son Royce showed the modern American audience just how effective Helio's approach remained in the 1990s by reeling off wins over a string of much bigger opponents in the early UFCs.

That's when Helio became a hero of mine. The beak-nosed old old old dude leading the train of Gracies to the cage. Wrinkled, bent and obviously ancient but still sharp-eyed, lucid, and ruthless, shouting advice from his son's corner.

Here's a quote from Helio that sums up his bad-ass outlook on life:

Why fear death? I don’t need anything, I don’t have anything, I don’t want anything. I think it’s silly for somebody to be scared of dying. One should be afraid of being born. I have already told my children when I die I want a party, with no alcohol, no hell raising [general laughter]. But I want a party with music, food… I don’t know if you guys believe in reincarnation, but we all go and come back until the day we no longer have to return. My brother [Carlos Gracie, already deceased] used to say the fellow only stops returning to Earth when he mingles with the Whole. Even when you’re thinking just a little bit wrongly, you come back to continue evolving. Hell, my friends, is right here on Earth.

In the extended entry I've posted YouTube clips of two of his most famous matches and written accounts of both.

The fight took place in the brand new Mario Filho stadium, the Maracanã, the biggest stadium in the world, built for the Soccer World Cup of the previous year. It was the 6th of September, and the ‘OGlobo’  newspaper of the day posted Helio’s declaration on the first page: "Today I will carry out my greatest endeavor, which is to face an element of such tremendous prestige as Kato, 5th degree black belt of only 22 years of age."

It happened that, one week earlier, Helio had fractured two ribs, during a training session with the marine gunner Marinho. But he did not want to postpone the fight, as recorded by the journalist Jose Amadio, then editor-in-chief of the Assis Chateaubriant group, which included such newspapers as "Diarios Associados" and the magazine "O Cruzeiro": "I’ll fight any way I can. Nobody will say I’m running away." Helio declared.

The fight ended in a draw, after three ten minute rounds. Helio insisted on saying he took a beating, by suffering more than 20 takedowns.

The newspapers at the time interpreted it differently. "So we arrive at the end of the first round, without seeing the Japanese fulfill his promise of winning easily and Helio, cold as ice, is already familiar with his adversary's moves. (...) And Kato was only not beaten by pulling his attacker out of the ring, which provoked boos from the audience." (O GLobo 7-9-51).

In 1955, Kimura, at 38 years old, participated in a match in which he defeated Hélio Gracie of the famous Gracie Jiu Jitsu family in a submission judo match held in Brazil. During the fight, Kimura threw Gracie repeatedly with Ippon Seoinage (one arm shoulder throw), Osoto Gari (major outer reap) *Kimura's signature throw. He threw Helio 3 times with Osoto Gari.*, Ouchi Gari (major inner reap), Uchimata (inner thigh throw), and Harai Goshi (sweeping hip throw). Kimura reportedly threw Gracie repeatedly in an effort to knock him unconscious. However, the floor of the fighting area was apparently too soft to allow this to happen. Kimura also inflicted painful, suffocating grappling techniques on Gracie such as kuzure-kamishiho-gatame (modified upper four corner hold), kesa-gatame (scarf hold), and sankaku-jime (triangle choke). Finally, thirteen minutes into the bout, Kimura positioned himself to apply a reverse ude-garami (arm entanglement, a shoulderlock). Gracie refused to submit, even after his arm broke, forcing Kimura to continue the lock on Gracie's broken arm. At this point, Carlos Gracie, Helio's older brother, threw in the towel to end the match to protect his brother's health. In 1994, Helio admitted in an interview that he had in fact been choked unconscious earlier in the match, but had revived when Kimura released the choke.

As a tribute to Kimura's victory, the reverse ude-garami technique has since been commonly referred to as the Kimura lock, or simply the Kimura, in Brazilian Jiu-Jitsu and, more recently, mixed martial arts circles.