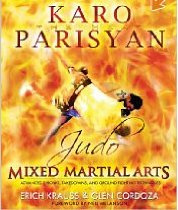 Another fine production from the Victory Belt crew. Karo Parisyan's Judo for Mixed Martial Arts (with Erich Krauss and Glen Cordoza) is quite possibly the one with the most novel take on mma.

Krass and Cordoza have their forumula down and Karo's the perfect addition to their series. He's a unique stylist who's managed to build a top-notch MMA game almost purely from Judo, an underheralded martial art in MMA.

The Victory Belt books aren't just a great way to improve your own MMA game (or understanding of the game if you're an armchair warrior like myself), they're also a great way to understand a particular fighter's strategies. In Karo's case, the structure of the book is very telling -- about 10 pages on standing control positions and transitions, 20 pages on stand-up striking (primarily as a means of getting to the clinch or a takedown), 75 pages on throws (!), 25 pages on throw defense, 60 pages on the five ground control positions, 11 pages on leg locks, 35 pages on the guard and 10 pages on ground and pound.

The throws are obviously the draw of the book and there's a LOT to chew on here. From techniques that Karo has used repeatedly in the octagon -- Seoi-nage, osoto-gari, o-goshi, and various hip tosses and throws from the whizzer -- to more exotic throws that I hope to see in the future (from Karo or an apt pupil) -- tani-otoshi, sukui-nage, kata-garuma and many others.

Many of the submissions are fairly novel as well -- cobra choke, near-side armbar, step over triangle, ude garame from north-south, etc. Karo definitely has a world of submission skills that he's only put to limited use in the Octagon.

The moves aren't explained in a vacuum either, at least 1/3 of the sequences describe transitions and set-ups -- either from one take-down attempt to a second or to a submission.

Karo's introduction goes a long way towards explaining why we haven't seen Karo finishing fights in the Octagon. His MMA story is rife with instances of undertraining for fights and underestimating opponents -- therefore he didn't have the gas in the tank to risk going for submissions in tough fights.

As much as I love Karo and enjoy his wild fighting style (I'm a sucker for a dramatic throw), its maddening to read confirmation of what I've long suspected. Karo just hasn't put 100% into preparing for fights and its now reached a point where the competition is just too steep to coast anymore. Here's hoping Karo can get his head on straight, get his hamstring surgically repaired and live up to his potential.

In the mean-time, his book is a must read for anyone looking to improve their takedown skills. As Nate Diaz and others have shown, adding some judo to your repertoire is a great way to control where the fight takes place even if you're a jiu jitsu guy going up against a wrestler.

The book's also a fun read if you're a couch bound geek like me and you just want to better understand what Karo's (or Yoshida or Miura or Nakamura etc) doing before he launches his opponents into the air.

I'm really looking forward to getting more of the Victory Belt series, maybe Fedor's will be my next pick up.