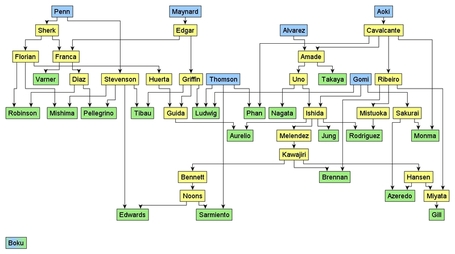 A new champion has been crowned, but did the results of the Dream Lightweight Grand Prix bring any changes to FightLines?  How badly does Roger Huerta's loss to Kenny Florian hurt him?  Who's the number one contender for B.J. Penn's UFC title?  The Fightlines power rankings have been tweaked, but does it do you any good?

- Joachim Hansen entered Dream 5 with little more than a preliminary fight with a very beatable opponent.  He left Japan the winner of a grand prix tournament and Dream's inaugural 70 kg champion.  Yet, he finds himself stuck on the FightLines graph.  The finals victory over Shinya Aoki ends up being washed out by Aoki's gogoplata victory over Hansen at Pride's Shockwave 2006.  This leaves us with a champion who could conceivably defend his belt against a wide array of challengers.  However, the two most fitting matchups involve a rematch with rising star Eddie Alvarez and a trilogy with Aoki.

- Alvarez, meanwhile, looks to be set for a fight with Nick Diaz for the recently vacated EliteXC Lightweight Championship.  While an intriguing fight for a few different reasons, it's a fight I expect Alvarez to win convincingly.  A much more relevant fight would be with Strikeforce Champion Josh Thomson.  Thomson is currently riding an 8 fight win streak including a victory over the former darling of non-UFC American lightweights, Gilbert Melendez.  An Alvarez-Thomson fight would bring greater clarity to the muddled division outside of the UFC and Dream.

- Over in the UFC, current champ B.J. Penn looks to be shelved from 155 action with a showdown involving Georges St. Pierre on the horizon.  This gives Joe Silva and Dana White ample time to sort out the pecking order for the title.  They have put together a nice little pseudo-tournament pitting Sean Sherk and Tyson Griffin together at UFC 90, while Joe Stevenson and Kenny Florian battle at UFC 91.  I assume a Florian win locks him into a fight with Penn.  A Griffin victory and Florian defeat, however, might catapult Griffin into the spotlight.  And in the case of Joe Stevenson and Sean Sherk emerging victorious, one can only guess how the division pans out from there.

- Roger Huerta, once one of the most heavily pushed fighters in the UFC, now appears to be in the doghouse following his loss to Florian and recent comments about fighter pay.  The UFC will be making a huge mistake if they give Huerta the Andrei Arlovski treatment.  Whatever problems exist between fighter and organization, Huerta still provides enormous value to the UFC.  He's young, he's exciting, he's arguably the most handsome fighter in the company, and he potentially brings in a demographic sorely missing from the regular audience.  I would like to see him matched up with "Mr. 209" Nate Diaz.  This is an example of picture perfect matchmaking.  You have two guys in the same tier of the division (though with one on the rise and the other have fallen a bit), both have fairly big names, they have heart, they're exciting, and they both love to fight.  It's a fight that could headline a Fight Night or be a supporting fight on a pay-per-vew main card.

Bwins - Beatwins, the number of fighters an individual has paths to below them on the FightLines graph

Bloss - Beatlosses, the number of fighters an individual has paths to above them on the FightLines graph

Aloss - Ambiguous Losses, losses that have been looped out that leaves two fighters without a path to each other

Fighters - Total Fighters, the number of fighters on the graph minus the fighter in question