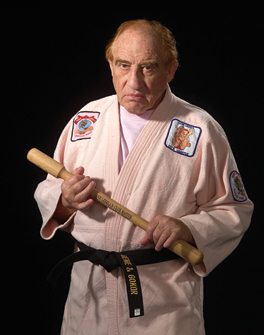 Carrying on with what I started with Helio Gracie, here's another tribute to a living legend. Yesterday was the 76th birthday of a man who may not be the grandfather of modern MMA but is certainly a great-uncle at least: Judo Gene LeBell.

Gene didn't just carry the torch for one fighting art, he carried two -- being one of the leading representatives of Judo in North America AND one of the few men to keep the tradition of "real" American catch wrestling alive during the second half of the 20th century.

Gene is also a Hollywood legend as a stunt-man and stand-in for stars from Bruce Lee to Burt Reynolds.

He still keeps his hand in the sport and if you've seen Karo Parisyan or Manny Gamburyan you've seen Gene's students in the cage applying the judo they learned at his feet.

He even did a little proto-mixed martial arts fighting of his own back in the day. In 1964 he took on boxer Milo Savage in a challenge match precipitated by a magazine article called "The Judo Bums" which asserted that any boxer could beat any judoka. As retold on Gene's web site:

...a contract was prepared by the author which set forth the following specific rules: the fight is scheduled for five rounds, three minutes per round. The boxer will wear a judo-gi top (Judo robe) and a belt. He can also wear boxing trunks, boxing shoes, and to his great advantage ï¿½use unweighed speed bag gloves which completely cover his hands. He can apply any legitimate punch and hit in any circumstance. He will not be curtailed by NBA rules. Gene, the judoka, will wear his judo-gi, no shoes, and no gloves. He can apply any recognized judo or karate technique except the karate kick. A winner will be declared under the following conditions: when his opponent is disabled or is counted out for ten seconds. A referee will be the sole judge.

Beck selected Milo Savage, a high ranking middleweight. Savage had been fighting professionally since 1945. He had beaten such fighters as Holly Mims, Moses Ward, and Bobby Boyd. He lost two close decisions to former champion Gene Fullmer. He won his last eight fights, six by knockouts and was negotiating to meet champion Dick Tiger. Savage therefore seemed to be a true representative for boxing.

Gene ended up winning the fight, despite allegations that Savage had covered himself in grease AND had brass knuckles in his gloves. I've put a video excerpt of the bout in the full entry.

Gene also cross-trained with Bruce Lee and is considered one of the people who turned Bruce on to grappling. Here's Gene talking about training with Bruce Lee:

"Bruce loved to learn grappling, he ate it up! He said that people would never go for it in movies or TV because the fights are over too fast and most of the good stuff was hidden from view. He said they wanted to see fancy kicking, acrobatics, and weapons -- he was a savvy showman who knew how to give 'em exactly what they wanted. I wish he could be around now to see how well grappling is doing these days. I remember one time he kicked me really hard. I remember thinking it was a good thing he only wore a size 6 shoe instead of a 14 like me, otherwise that kick would have sent me to China! He was strong for his size, lemme tell ya.

Gene hasn't just carried on the judo tradition either. He learned the old-time "hooking" style of pro-wrestling from Ed "the Strangler" Lewis -- the lost art of real grappling and submission holds that dominated pro-wrestling back before the outcomes became pre-determined.  Here's a great bit about Gene and how he brought his grappling background into Judo in his teens:

Ed "Strangler" Lewis, started Gene off in the world of grappling (not wrestling, wrestling has different rules). Ed explained that with grappling you could do just about anything to your opponent. You could hit the guy, do heel locks, ankle locks, armbars, back locks, neck locks, tweak the nose or choke him out. Needless to say, when Gene entered his first out of school judo tournament at the age of 14, the officials were horrified to see Gene performing illegal grappling moves on his opponents - tossing them into the air and jumping on them, dropping elbows on them, and simply terrorizing his competitors.

Gene has documented many of these finishing holds in Gene LeBell's Grappling World, The Encyclopedia of Finishing Holds. A totally fun book that's a worthwhile reference, although its criticized as it doesn't go into the set-ups needed to apply the holds. My view is that its much more valuable for Gene to document his knowledge while he's alive so that the holds are recorded somewhere. And besides, it doesn't take long to figure out which holds are solid and which are totally impractical.

I'll close with a couple of classic quotes from Gene:

On becoming a stunt man:

"People saying you're the toughest guy around is great, but it still doesn't add up to one car payment. Now I get beat up by every wimp in Hollywood and make thousands of dollars. You tell me which is better."