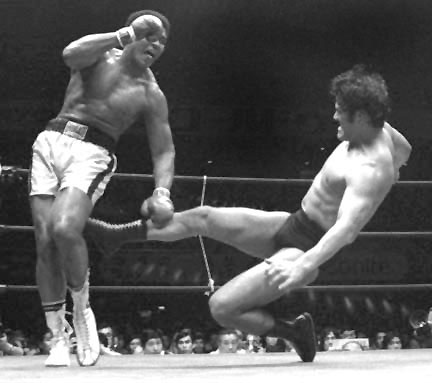 I know last time I mentioned talking about the entry of olympic wrestlers into MMA but I realized I needed to talk a little more about the evolution of the sport in Japan first.

Here's Sam Chan talking about the way the last of the old time "hookers" (submission wrestlers) Lou Thesz and Karl Gotch came to Japan and passed their dying art on to a generation of Japanese pro wrestlers:

Both wrestlers, but particularly Karl Gotch, enjoyed the admiration they received in Japan and were impressed by the interest of Japanese wrestling stars in European "hooking". Eventually, Gotch taught this tradition, also referred to as "shooting", to a group of Japanese professional wrestlers including Antonio Inoki, Tatsumi Fujinami, Yoshiaki Fujiwara, Satoru Sayama (the "Tiger Mask"), Masami Soranaka and Akira Maeda. What is interesting to note is that most of these professional wrestlers already had backgrounds in legitimate martial arts. Masami Soranaka had been a student of "hard core" karate, kodokan judo and sumo. Yoshiaki Fujiwara was already a Muay Thai fighter and black belt in judo. Satoru Sayama had studied Muay Thai with Toshio Fujiwara, and went on to study Sambo with Victor Koga. Thus, the ground was fertile for the development of new hybrid methods.

While many people have been critical of Antonio Inoki, saying his wrestling skills were weak and noting (correctly) that he was a "work" fighter, he should receive credit for introducing the idea of mixed style matches. Beginning in 1976, Inoki staged a series of mixed matches against fighters of other sports including Willem Ruska (judo gold medalist in the Olympic games in Munich), Chuck Wepner (a tough club boxer) and Willie Williams (world kyokushin karate champion). Of course, the most famous of these was the Antonio Inoki vs. Muhammad Ali match.

That brings us to the godfather of Japanese MMA, Antoni Inoki. Wikipedia does a good job of explaining what he was up to in the 1970s:

Inoki then went on to stage a series of mixed martial arts matches against champions from numerous other disciplines of martial arts.

Antonio Inoki was a pioneer of mixed martial arts and has faced many opponents from all dominant disciplines of combat from various parts of the world, such as Akram Pahalwan in Pakistan, Willie Williams of Kyokushin Karate, Olympic judo gold medalist Willem Ruska and WBA and WBC World Heavyweight Champion Muhammad Ali.

I can't find any video of the other matches, so here's the fiasco with Ali. [Note: Thanks to BE reader Peter van Rijn, I found this page that includes some video of Inoki's two matches with Judo gold medalist Willam Ruska.They appear to be obviously worked matches.]

Anonio Inoki's mixed style matches and his pro-wrestling organization's incorporation of many martial arts techniques (notably low kicks and judo/jiu-jitsu submissions) began to interest many of the wrestlers into creating an even more realistic style. On April 10, 1984 Akira Maeda, Rusher Kimura, Ryuma Go, Mach Hayato, and Gran Hamada formed the original UWF, Universal Wrestling Federation. The UWF promoted a "stiff" style of wrestling. The matches remained "worked" but all the strikes and submissions were delivered with full force. Based upon the already existing pro-wrestling tradition, matches were set up with hand signals, body movements, and even talking. However, the UWF was particularly good at setting up matches with very few cues.

The "stiff" style can appear quite realistic to those unfamiliar with it. Matches would end only when one fighter was either KO'd legitimately or decided to stop fighting a submission and gave up. If the pre-determined loser had the pre-determined winner in a tight submission, he would simply release the hold or loosen it up. A few months after the creation of the UWF, Satoru Sayama (who had gained success as the original Tiger Mask in New Japan Pro Wrestling), Yoshiaki Fujiwara and Nobuhiko Takada (who had begun training in "hooking" with Lou Thesz) joined the organization. They moved the UWF in an even more realistic direction. In fact, a few real matches were arranged between UWF wrestlers and outsiders such as boxers or sumo players.

The original UWF lasted a little more than a year. During a Akira Maeda-Satoru Sayama match on September 2, 1985 Maeda intentionally kicked Sayama in the groin. Those who observed the match say it quickly became 100% "shoot" as Sayama tried to KO'd or choke Maeda in retaliation. After the match, Maeda was fired but the event also revealed that many wrestlers were unhappy with Sayama as well. On September 11, the UWF held its last card at Kourakuen Hall.

Here's a little more about the UWF from wikipedia:

The original Japanese-based Universal Wrestling Federation (UWF) was a Japanese professional wrestling promotion from 1984 to 1986, formed by wrestlers who had left New Japan Pro Wrestling. It was a pioneer in the shoot-style of pro-wrestling, which emphasized realistic moves. ...

The original roster included Rusher Kimura, Akira Maeda, Ryuma Go, Mach Hayato, and Gran Hamada. Soon, however, they were joined by Yoshiaki Fujiwara, Nobuhiko Takada, Satoru Sayama (the original Tiger Mask) and Kazuo Yamazaki, and this changed the orientation of the UWF's wrestling from the traditional style to a more martial arts oriented style. Maeda, Fujiwara, Takada, Sayama and Yamazaki had been martial artists before joining New Japan Pro Wrestling, and they began incorporating realistic moves, including submission holds and kickboxing-style kicks, which created a new form of wrestling called shoot-style.

In 1984 another former New Japan wrestler, Osamu Kido, who had trained under Karl Gotch, joined the UWF. But just as the promotion fledged, Maeda and Sayama, the top two stars, began bickering with each other over the shoot-style's essence. Maeda wanted to focus the matches on submissions, while Sayama, a former kickboxer, wanted to focus on kicks. This came to a head in a brutal match in late 1985 when Maeda did not pull a kick and instead kicked Sayama hard in the groin, causing a disqualification.

Sayama, embittered with wrestling after this match, left the UWF and was not heard from again in the wrestling world for 11 years.

...
Because clean finishes (as in, submissions or knockouts in the middle of the ring) were used, so the fans could see clear-cut winners and losers, it was more accepted as "real fighting" than New Japan or All Japan, which at the time were still using the American-originated standard of countouts and disqualifications.

Shortly after the death of Japanese Emperor Hirohito in early 1989, Maeda held a meeting with New Japan promoter Antonio Inoki, in which they agreed that Fujiwara, who had remained in New Japan but now wanted out, would be allowed to rejoin UWF and bring two of his disciples, Masakatsu Funaki and Minoru Suzuki, with him. That year also saw the debut of Kiyoshi Tamura, who is still recognized as one of the eminent shoot-style pro-wrestlers in Japan.

After the UWF broke up and the leading Inoki disciples split off into many camps, several of which ultimately became part of the greater MMA world in the 1990s:

Shoot wrestling branched into several sub disciplines after the breakup of the original Universal Wrestling Federation. The main forms are listed below.

Here's more from Chan on this period:

In April (1988), Maeda and Nobuhiko Takada announced that they would start a new UWF. The new UWF limped along without either Satoru Sayama or a young charismatic star. However, in April 1989 Akira Maeda reached an agreement with Antonio Inoki to let Masaharu (Masakatsu) Funaki and Minoru Suzuki leave New Japan for the UWF. Maeda personally trained Funaki and Suzuki in the UWF's "stiff style" wrestling and the group began to thrive with the addition of the two young wrestlers. Later, Maeda also acquired and trained two American wrestlers, Bart Vale and Wayne (Ken) Shamrock.

The UWF reached its peak with their "Atlantis" show at the Tokyo Dome on October 25, 1990. The card featured Akira Maeda vs. Masakatsu Funaki and Nobuhiko Takada vs. Yoshiaki Fujiwara as well as Yoji Anjoh and Wayne (Ken) Shamrock in individual bouts. Unfortunately, the UWF continued to have internal problems and on December 1, 1990 UWF President Shinji Jin announced that all wrestlers were fired and disbanded the promotion. This resulted in the creation of three separate and very different organizations in March 1991.

Yoshiaki Fujiwara formed the Professional Wrestling Fujiwaragumi (PWFG) with the support of Masakatsu Funaki, Minoru Suzuki, Yusuke Fuke and the American Bart Vale. The PWFG was, like the original UWF, a "stiff style" wrestling organization with worked matches. The next year, Bart Vale would become the PWFG champion and would hold the title for close to three years. Having an American as champion brought some attention to the PWFG. In addition, Bart Vale promoted the PWGF in America as a legitimate, "no holds barred" organization. In the United States, Bart Vale has also created the International Shootfighting Association (ISFA).

Shortly after the formation of RINGS and the PWFG, Nobuhiko Takada formed the Union of Wrestling Forces International (UWFi), using the remaining UWF talent. Takada succeeded in getting Japan Satellite Broadcasting (WOWOW) to became the new UWFi's sponsor. Takada also created legitimacy for his new organization by using the original NWA belt, donated by his mentor Lou Thesz, as the official UWFi championship belt.

In 1992, Wayne (Ken) Shamrock left the UWFi to briefly join the PWFG. He then united with Masakatsu Funaki, Minoru Suzuki, and Yusuke Fuke to form the Pancrase organization. Led by Masakatsu Funaki, they claimed to be looking to establish a wrestling organization that was 100% "shoot". Pancrase had their first show on September 21, 1993. In December 1994, Wayne (Ken) Shamrock became the first King of Pancrase, defeating Funaki in semi-final and Manabu Yamada in final. However, to establish themselves and sell tickets, early Pancrase matches were frequently "stiff style" with pre-determined outcomes.

One of the key players in the evolution of Japanese wrestling into MMA that gets overlooked is Yoshiaki Fujiwara, mentor of Pancrase founders Funaki and Suzuki. Here's something interesting I found in his wikipedia entry:

Fujiwara was the first graduate of the New Japan Pro Wrestling dojo (Mr. Pogo was the first debutante in the promotion, but he and Gran Hamada had trained with Tatsumi Fujinami before he and Antonio Inoki left the Japanese Wrestling Association). A former Muay Thai kickboxer, Fujiwara was easily able to absorb and apply the "Strong Style" of professional wrestling taught by Inoki and Karl Gotch. In 1975, this led Fujiwara to win the Karl Gotch Cup (a tournament for rookies named after Karl Gotch and forerunner to the latter Young Lions Cups).

More vids in the extended:

And here's a real freakshow match, a pro-wrestling match from 1986 in which Andre the Giant and Akira Meada fought a work that turned into a shoot, Maeda legkicked the poor giant for 15 minutes. Ouch! Part 1, 2, 3, 4.

Highlights from the Lumax Cup event of 1995, a judo based event with early MMA rules. Keep an eye out for Egan Inoue, Akihiro Gono, Kazunari Murakami (getting KO'd by a kick), and tourny winner Tsuyoshi Kohsaka.